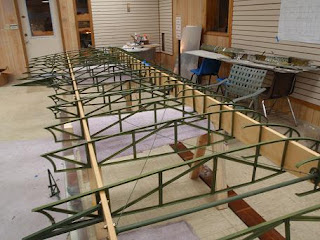 I have to admit, I like the look of steampunk - each piece that comes up on the net is often creative, thoughtful, meticulously done with attention to detail, crafted with care and passion.

That said, I also have a great love of automated assembly - what robotic assembly lines lack in craftsmanship, they gain in interchangeability, reliability, and affordability. Now, the designers must craft the love and passion to be replicated a ten thousand times over - and when marketing doesn't understand the materials they're working in, you get cheap cameras that break in your hand, and cool-looking cell phones that do everything you could want poorly, and still drop your calls.

My plane was the best, or worst, of both worlds - even today, all planes are made by hand. You can tell - though made on jigs that allow very little variance, when you repair a plane, each piece has to be carefully fitted, often adjusted or slightly altered. For mine - I am just now replacing her spars, stamped with serial numbers from original installation at the factory. The replacements are close, but took some work with file and varnish to fit the hardware.

She came, once, with a lush headliner and insulation, probably wood veneer panel, leather-wrapped yokes, cushioned foam seat... But by the time she came to me in Alaska, every ounce that could not be justified had been stripped out to save weight. Now, sitting in her canvas sling seat, you can see the bare bones of her welded fuselage and wooden stringers between holding the shape of her skin, fabric pinkish-brown on the inside still showing its origin stamped on the fabric. Her instrument panel is a far cry from modern six-pack instrument layout (she predates that design by decades). It's black-painted metal with the mandatory labels glued down and peeling, curling at the edge. Even her yokes are stripped-down, bare-bones.

She is still beautiful to me, for the possibilities, the dreams, the motion inherent in every line, the freedom of the skies. I like the way her clean curves arc down the length of her body, the simplicity of purpose and design, the arch of her airfoil and the golden gleam of her new spars, shimmer of colors in the cadmium wash of her new hardware. Was it Heinlein who once advised to love a woman, and you will come to find she is beautiful?

Still, I am looking at steampunk - an aesthetic which likes to make gears and dials and bare bones beautiful. With a a lot of thought and care, I would like to decorate her bare bones, without adding heavy weight that would retract from her performance. (As if, being female, I wasn't having a hard enough time deciding what to paint her!)

So I'm gathering ideas, in much the same way we shop for our next outfit and hairstyle by people-watching. And I'm looking at her instrument panel, and looking at this page. Clearly, I'll need the designs and labels selected and laid out, panel cut not only to the plane but to the instrument's holes, and it'll be a much larger-scale piece of metal... but I don't plan to touch her fuselage for three years, and I may have it worked out by then.

Drag wires are stripped, all the paint brushed out of the threads, nuts loosened and checked, repainted, and on the right wing.

Aileron control rod replacement is in from England. (The internet is so cool - you can get parts anywhere, as long as they exist and your owner group is strong!)

Yesterday, learned how to use a shear, a brake, and rollers for cutting, bending, and curving sheet metal. Learning how to use and mastering are completely seperate states. I have a lot of work ahead if I'm forming new aileron cove. I wish I could re-use the old cove, but whoever took it off the plane was, ah, less than careful.

The new leading edge will be interesting. In 1941, they used 0.012 inch aluminum - yes, twelve-thousandths of an inch thick. This is roughly as thick as a pop can's side walls. See, back before World War II, Aluminum refining had not yet been perfected, and it was not that common a material - so it was expensive! Therefore, very thin sheets were common - you wanted to use the absolute least amount of this rare, expensive material necessary to get the job done. These days, aluminum is extremely common and cheap - but you can't find anything thinner than 0.016 - that's, what, 25% thicker? Heavier, which is bad, but far sturdier, which is good.

If you're wondering how the leading edge avoided being dented when it was pop-can wall thick, the answer is that when covered, the cloth and dope went over the metal, providing a second layer of reinforcement for strengthening, stiffening, and protection against corrosion and collision with bugs. As for accidental knocks when clearing snow off with a broom, or dents from being leaned on or bumped when fueled? Well, those were just a part of life. Be careful or you get 'em.

The aluminum was also SO, or as jewelry-makers call it, full-soft. It can be bent and shaped by hand, and stays bent. This is also called, on the T Hardness scale, T0. (T0-T6) T1 & T2 are darned rare and hard to find, but T3 & T6 are common - or "half-hard and full-hard" to jewelers. So, I'm planning on replacing the first 4 feet of the leading edge with 0.016 T3 Aluminum, or much harder, dent-resistant, thicker aluminum than was originally on it. This way, should someone lean an elbow on the wing while putting gas in (like yours truly, who has dislocated her right shoulder before, and it'll never be as strong again for hefting jugs of gas), it won't be thrashed and dented for the next 8 years until recovered.

The old aileron cove looked like swiss cheese - because in 1941, airplanes were covered with linen or cotton, and a highly flammable dope (glue.) How flammable? Google Hindenburg. The dope didn't stick to metal, so they laid a second piece of linen on the back of the aileron cove's convex curve, inside the wing, and glued it down. Then, when the doped cloth was laid on the outside of the wing, over the aileron cove, it stuck to the doped cloth on the inside through the holes.

These days, we have options like Poly-Stits and Ceconite. Not flammable, or not nearly so, and it sticks to metal. Interestingly, this means that unless I duplicate the linen-on-the-back trick, all the swiss-cheese holes will now detract from the ability of the fabric to stick to the metal while the metal is held in shape. Hmmm.

On grinding - my right rear spar was 1/4 inch too long. Clearly, the person who cut them was better at woodworking than me, but not as perfectionist. So I got a miter saw, discovered that the amound to be cut was half the blade width, got two files, and carefully took off the offending 1/4 inch by hand. It is now varnished, and when the varnish is dry, I'll put the butt attach fittings on.

...It's so close I can taste it, though the completed wing is still months away. Tonight, priming the wingtip bow that defines the rounded edge of the wing, and seeing if I can figure out how to put it on.
Posted by On a Wing and a Whim at 8:34 PM 3 comments: 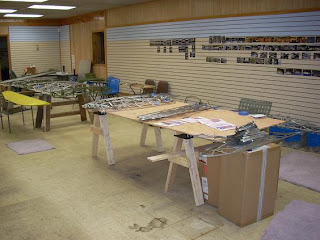 Some of the repairs were pretty trial and error - others we asked for advice on the internet and had handy how-to's ready to apply. Two steps forward, one step back, but progressing every week! Best of all, compared to a fixxer-upper house; I don't have to live with the work in progress affecting the heat in the winter or ability to take a hot shower!
Posted by On a Wing and a Whim at 3:16 PM 2 comments: