In 1855 Aluminum was so precious, rare, and hard to smelt that it was displayed in an exposition next to the crown jewels of France. Any man on the street could have told you that it was a semiprecious metal, priced roughly the same as silver. Plastic did not exist. People could not fly.

Thirty years later (1886), two people on two different continents, building their own batteries and using the power of electricity, managed to create a process to smelt aluminum. In 1888, the first commercial smelter had been built, in Pittsburgh. Aluminum cost $8/pound, or roughly $118/lb in today dollars.

This was only fifty-three years before my airplane was built - less than the lifespan of my plane to date.

December 17, 1903 - on a windy beach, a flyer powered by a hand-built exotic aluminum motor (light enough for the purpose) lifted off its rails on a beach and flew.

This was only thirty-eight years before my plane first flew - a span of time almost less than half her current life.

In 1914-1918, The war that engulfed the world came to aluminum production. 90% of capacity was devoted to wartime material, and it was regulated and controlled by the government. At the end of the war, there was a lot of surplus capacity for making cheap aluminum, and a whole new market of soldiers exposed to the material.

The War To End All Wars, as they called it, ended only twenty-three years before my plane was built.

In 1937, Alcoa produced 90% of the aluminum in the world - and this grave error of being first and best, regardless of intent to monopolize, meant the FTC filed one of the longest running antitrust cases against Alcoa. The company would come dangerously close to being put out of business by judicial fiat - including a special act of congress giving the 2nd Circuit court of appeals higher standing than the supreme court after they were found not guilty on all 130 counts, so that the government could win on appeal.

Clearly, the government intended to put Alcoa out of business, no matter what facts or truth might be. And with the War to End All Wars now reduced to being called the Great War as Europe was burning, the military was starting to monopolize the aluminum supply in preparation for our entry into that war - not If, but When. Aluminum, never that plentiful, was expensive and scarce.

So when I say my ribs are aluminum truss, stop and contemplate the marvel of using a new, rather unfamiliar material, which while much less expensive than it used to be, was still expensive and hard to acquire in mass quantities. Each rib of my airplane is a work of art, in which a thin sheet of this highly expensive material was folded to increase stiffness and rigidity into a T-shape or a W-shape. Then, very like assembling a bridge for cohesion, strength, and resistance to all twisting forces from any side, the pieces were riveted together with the least amount of metal possible, using the same mathematics that led to the creation of truss bridges that spanned formerly impassible gorges and carried rail freight across the land (And those marvels the rib imitated on smaller scale were less than a century old themselves.)

My leading edge was formed of aluminum so thin it could not withstand the impact of a fly on its own, but used as a reinforcement for doped linen, it became tough and strong enough to hold its own. More very thin, very expensive, aluminum was carefully spared to form an arrowhead-shaped trailing edge and the curved aileron cove that held the fabric in a concave shape so the aileron might nestle into the wing.

This presents problems - today, in a world where aluminum is so plentiful that people use it for their drinking containers and throw it in the trash when they're done, there is no need to stretch and conserve aluminum so tightly. Therefore, I literally can't find aluminum in the proper alloy thin enough to replace my leading edge with what it used to have - and the material to remake my aileron cove had to be sought, specially found, and shipped up on the barge. Atlee Dodge tried to make the complex bends out of the thicker, more common material, only to find that the design created to stretch this once-rare, once-expensive metal also took every advantage of its flexibility and lightweight nature - and the thicker alloys crack when they try to fit the same tight bends. In some parts, I can sacrifice her lightweight nature and hurt her performance by using modern thickness - but sometimes I must search and search for what was once everyday.

So when you see her ribs, understand that thinking of them as fragile, flimsy things is to see them with eyes blinded by modern culture - and to step back and see them in the context of history and design, they are each a work of art, crafted by the hands of women in a factory where the only men left were too old, too valuable, or too broken to be drafted into military service. Dolores said, once, that "They liked the girls to make the wings, as we had smaller hands. By day, the men - what men were left! - would put the frames together, and at night, we'd build the wings."

December 7, 1941 - She was grounded, as were all airplanes, for word came that Pearl Harbor had been attacked by enemy planes. The world had gone up in flames, and no longer would we build forces and worry - we were at war.
Posted by On a Wing and a Whim at 3:50 AM 1 comment: 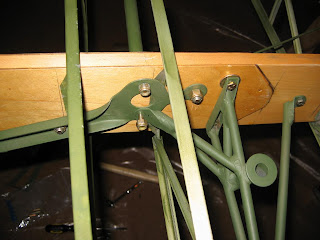 What's wrong with this picture?

AC 43.13 B states that a bolt must have at least one thread past the end of the nut. If I had a set of blueprints that stated what bolts I needed, this wouldn't be an issue. On the other hand, since I don't, this means that my method of choosing hardware is to find something for the correct size hole, cross-reference with the old hardware, and get what looks like the correct length. Unfortunately, any time you put a fitting on wood, especially when other fittings fit on top of that fitting, and not all fittings are the same thickness... you get the goldilocks method of finding the right bolt length.

Well, why don't you just choose bolts that are too long and that way you have enough? Because it doesn't work like that - there's usually a fixed length of thread, and then a thicker shaft on each bolt. The longer the bolt, the longer the shaft, not the threaded section. If the shaft protrudes past the fittings, the nut will only tighten to the shaft, leaving the fittings wobbly-loose and the bolt freely rotating in the hole. Bad idea. So, time to do the boltey-pokey. We put the short bolt in, we take the short bolt out, we put the too long bolt in, and we wrench it all out. We put the slightly longer bolt in, we take the slightly longer bolt out....
Posted by On a Wing and a Whim at 4:11 AM 1 comment:

Progress, regress, but at least it's not congress...

Right. That whole trailing edge rib fitting works better when you finally realize the piece you thought was the original, wasn't either. It was simply a better-modified but not completely matching replacement version. And the original pair, when you find one, matches enough with the pictures to be for the other wing, which you haven't started assembling yet. The other half of the original pair? Long lost - may not have ever had in the first place.

Back to sanding and repairing, cutting and drilling. Priming and bolting to follow!
Posted by On a Wing and a Whim at 2:08 AM 3 comments:

My wings came to me in twelve totes and bundles, without blueprints. This means sometimes I get fairly far along before realizing that there's a little piece that should go right there. In this case, I finally got all the main ribs and noseribs on my right wing, and started fitting compression struts when J of Call to Wings lifted up a primed part and said "Where do these go?"

In her hand she held two trailing edge ribs. Which, in the year I've had this project, I've obviously sanded free of corrosion and primed, but then forgotten about. Where do they go? There are two different styles, too, so am I looking for another set for another wing? This sounds fairly simple to look at the photos of wing prior to disassembly and see - but it turns out that since the aileron cove was nailed to the rear spar with plenty of supports, it's really hard to tell trailing edge rib from cove support.

Today, after much scrutinizing of the old spars at lunch, I suddenly understood - it's the nail holes that tell the story in varnish. There's only one trailing edge rib, which only nails to one side of the spar! The reason the second trailing edge rib doesn't look the same is because it was cut from a full rib, and never fully modified - the second piece of metal for nailing to the spar removed, a third of the remaining piece that gets nailed to the spar cut and flattened to fit under the strut support!

Tomorrow, I shall modify the second trailing edge rib - because it's better to modify it now than to wait until the first is nailed to the wing and not able to easily examine!