The Indiana Seaplane Pilots Association (ISPA) is seeking help in with a state-wide seaplane issue that is heating up.

Indiana, as you may know, is backwards when it comes to seaplanes. Unlike WI, IL, MI, MN, etc., where the rule is (more like) "open unless prohibited", the law in Indiana is "closed unless an approved seaplane landing area (base) exists." There are only four public-use seaplane bases out of over 750 lakes in the state.

Since 1998, Randy Strebig, a Maule-driver and SPA field director from Ft. Wayne, has singlehandedly fought for more access. Through his efforts and those of his organization, ISPA, over time, INDNR and INDOT have granted a pilot program of private-use landing areas on 17 lakes. You have to get Randy's permission to land, but at least they're somewhat open. (Admittedly, requiring permission from a private individual to land on public waters is a screwy situation.)

Now the INDNR has proposed changing the status of five lakes from private-use to public-use. This is a (small) step in the right direction. There is some concern that they might simultaneously try to restrict or close access, but we're hoping for a big show of support to avoid this.

There is a briefing paper on the ISPA website at:

-Write a letter of support to INDNR, with a copy to INDOT and our organization (see sample letter on the website)
-Sign our online petition at: www.petitiononline.com/inseapln
-Send this message to other supporters

Attend and speak at one or both meetings scheduled by INDNR for Feb. 3 and Feb 4.
Write a letter to the editor of your local paper
Posted by On a Wing and a Whim at 4:19 PM No comments: 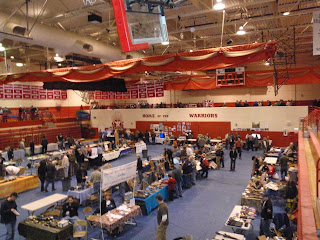 Beyond that, tomorrow I get to get up early and start calling museums in other time zones, talking to librarians and restorers. Because sometimes, no matter how wonderful the internet, it only leads you back to the favorite places of my childhood where knowledge is preserved long after a server goes down.
Posted by On a Wing and a Whim at 12:15 AM 2 comments:

Of Dreams Writ in the Sky

Today is an absolutely beautiful sunset - the clouds overhead do not cover the horizon, and break just before coming to the ground for a streak of robin's-egg sky blue. The sunset light coming under the clouds is purple-washed peach, shining bright off the wet ice from the west and glowing off the clouds swathing the mountains to the east. A rainbow shoots high into the sky, looking far more orange, peach, and purple as the sky behind it glows like watercolors running over floodlights. Looking to the north, where night holds reign above the arctic circle and floods back over the land after every short day, the clouds fade to deep blues and violets, broken with swathes of gold where low-hanging scud catches the evening light.

It is 42 degrees out, as a powerful low has spun its way up from the south and brought moisture and warmth, ripping through the atmosphere with winds that have peaked at 105 knots and vary between a deceptive 5 knots and ten minutes later ripping gusts at 32. There is a rain falling, almost an alien thing after months of frozen cold, and the snow is melting - everywhere, the ground cover is showing through snow like it is spring, and the ice is polished with running water. The wet ice gleams with all the glory of the skies above, reflecting light back to light.

This is a good day to be on the ground. You see, no matter how pretty it looks - and it is astounding enough to draw city-dwellers out, calling others to come out and see - it is deadly. Like jewel-colored poisonous snakes and frogs, this beautiful sky would do its level best to kill any pilot who tempted it. Part of flying is learning the wisdomto tell when you're seeing a swallowtail butterfly balancing on a lilly, and when it's a fer-de-lance coiled around a tree branch by an orchid.

Being outside is like walking in a dream, it's so beautiful - the kind that makes your chest ache at emotions battering inside even as the wind buffets your body. And as I watch it from the shelter of a coffeeshop, slowly fading into a million hues of purples and blues, I think of another, more enduring dream, and a conversation that circles in my skull.

Recently I was talking with Oleg Volk, an extraordinary photographer and champion of the right to keep and bear arms, about dreams. In that quiet way that we let slip our deeper desires, he said that he dreams of a day when the very idea of gun control is looked upon by the general public with disgust - when the very idea of taking away a responsible citizen's ability to defend themselves is as abhorrent as, say, the government requiring licensing, permits, and quota'ed approval to have children. (I think he chose a different metaphor, but the comparison still stands.)

I personally dream of a day when aviation is truly accessible to all, the barriers and negative stereotypes have fallen, and the public at large is positive about flight. Our dreams have much in common; both our passions are under attack by Hollywood stereotypes that have little to do with reality, by a media that relentlessly seems determined to give them bad press, by lawyers determined to punish our industries for the actions of criminals and mistakes made by users, and by politicians determined to protect us from ourselves, at the cost of our freedom - while leaving us prey to criminals and the malicious or merely uncaring employees of bureaucracy there to keep us safe. (Some of you may be thinking of Ruby Ridge or Waco at this point. I point out the indignities and stupidities that the TSA subjects us all to in the name of safety, as well.)

Flying is a great freedom, and a great responsibility. There are no cops waiting under the overpass or in a speed trap, no roadblocks to test if you're drunk, no traffic lights, stop signs, speed limits, and construction zones. There are also no shoulders to coast onto and call a tow truck, no concrete dividers and guard rails to keep you from danger, no airbags, no crumple zones. For the freedom to go anywhere comes the responsibility to separate yourself from traffic, to judge the wisdom of testing the weather... You alone are responsible for your flight, and if you mess up, you are to blame. It can kill you if you are careless - no second chances, no pointing a finger and blaming someone else, no slap on the wrist.

Firearms are also a great freedom, and a great responsibility - and as with aviation, unforgiving of mistakes. The very first thing you should be taught when handling firearms are the four rules - and the first is to always respect the ability and potential, to treat all firearms as loaded, all the time. So similarly you always treat a prop as if a lead is broken and a careless turn could start the plane, treat the weather as though it could turn bad... respecting the danger inherent in a thing disarms its ability to surprise you by being dangerous. Yet this danger, and the responsibility it demands, is not a thing to shun and fear. Life is always a risk, and the rewards, from knowing I can protect myself should another rapist try again to the ability to soar over a glacier and touch lightly on land I could never reach otherwise, are far greater than the dangers inherent.

So I sip my tea and write as the thoughts circle my brain: I know the kind of society I want to live in, and I have a dream of how it should be - but how to get from here to there is unclear, and I think it will take not one silver bullet but a thousand answers, many hands dedicated to the task. Outside the incredible light display has faded to night, leaving us a tomorrow that is ours to take, to shape, and to make. Here's to you, Oleg, and to freedom and responsibility for all.
Posted by On a Wing and a Whim at 10:09 PM 3 comments:

Don't do this at home 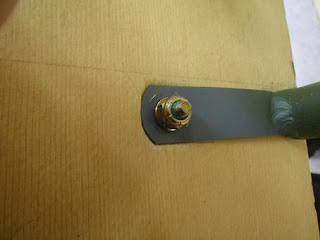 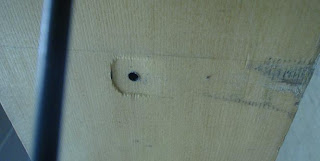 When tightening a bolt down on a metal to metal surface, you crank down til it stops turning.

When tightening a bolt of the length called for in the blueprint that's actually at least 1/4 inch too long, if you crank down til it stops turning, the entire bolt and nut keeps turning.

When you're tired, frustrated after cutting sizes down twice already, and cranking down on a bolt on wood, YOU MUST STOP WHEN THE FIXTURE IS TIGHT...

not when the nut stops turning. Or you sink the metal into the spar, breaking the grain, and ruin the spar.

yeah. I broke one of her bones, and on unliving creatures, these wounds do not heal no matter how many recriminations are made or tears shed.

It's not the end. I can get another expensive one carefully crafted. These old planes are endlessly repairable, else she wouldn't have survived 68 years already.

Progress will continue after a hiatus.
Posted by On a Wing and a Whim at 1:40 AM 2 comments: