How many pilots are there total? Well, it depends. The FAA gives a very precise number of 613,746 active pilots, but precise is not the same thing as accurate. (See the mars lander, with its precisely calculated flyby that turned into a kablooey because it wasn't accurate.) Let's look at the footnotes, and see how the calculations have changed over time.

To start, let's look at the home of the FAA on the web. Oh, stop making wards against evil - they actually have improved their site design to the point that you no longer need google or a direct link to find information. The statistics are at: http://www.faa.gov/data_research/aviation_data_statistics/civil_airmen_statistics/

Active pilot population is counted by counting the number of active medical certificates - for any powered airship (except, now, sport pilot), a pilot must have a current and valid medical to fly. Since medicals used to expire every 0.5 to 3 years, this used to neatly seperate those maintaining the ability from those who've hung up their wings. However, comparing past numbers to recent numbers doesn't account for the way they've changed the rules of the game and moved the measurements in the meantime.

The FAA has always skewed its numbers by including student pilots in total pilots. This is akin to including every pre-med student as a practicing doctor when looking at the total medical profession. Only 30% of students slog through the FAA-imposed requirements to get their license.

In 1995, the FAA changed classification of pilots from counting them by their airplane certificate to counting by the highest certificate. So, if the pilot had a private airplane and a commercial helicopter, he went from being counted as a private to a commercial pilot. This isn't a bad thing, per se, but it does permanently skew the pre-95 and post-95 numbers so comparisons are as apples to oranges, not apples to apples.

In 2002, they blatantly made the true numbers harder to track, by stating that any pilot who'd ever gotten a glider rating, would now be counted among the Glider (only) pilots in perpetuity after their medical lapsed. In 2001, there were 8,473 glider-only pilots, and the population had been steadily declining for years. In 2002, the FAA stated there were 21,826 glider-only pilots. Given that flying gliders as a past time did not suddenly jump in popularity sufficient to see the number of glider pilots out flying more than double, this is clearly an attempt to camouflage huge losses in pilot population following 9/11/01.

Worse, because we know the glider population was steadily declining, we now know that all the number from following years are off - but not by how much. The best we can do is either assume the percentage of decline held steady, or use the last known good figure. Neither is very attractive, or useful for extracting the true numbers.

In 2005, the FAA created a new certificate and category of airplane, stifling the highly popular ultralight industry by claiming all of its trainers, the so-called "fat ultralights", now were sport-pilot category planes, and that the self-regulated industry must now submit to FAA micromanagement. The process for getting a license went from a quick industry-group course to a confusing maze of signoffs to get anywhere in the airspace system - and there was a deathly lack of infrastructure, including examiners to give the checkrides for the new certificate. Those who played along in order to stay legal boosted the pilot statistics - and as they do not require a medical, the only way to remove them from the "active pilot population" statistics is by notification of death.

In 2008, the FAA extended the time third-class medicals are valid for people under 40 from three to five years. Given the average age for licensed pilots, by category, ranges from 44 to 53 years old (except students), this was not highly useful to the majority of the pilot population. However, student certificates are one and the same as medicals - and this was retroactively applied, such that every pilot whose medical lapsed in the last two years was now current and able to be counted as active again. Despite the number of issued ratings, hours flown, and aircraft built, shipped, or flown actively, the statistical total jumped from a declining 590,349 pilots in 2007 to 613,746 in 2008.

Unfortunately, no matter how the statistics can be plumped, tucked, and presented, the reality of the pilot population is dire - and now, we have no way to sort out the truth behind the carefully presented numbers, and no way to tell if any changes actually have an effect, whether positive or negative.

While I'm trying to catch my muse while stumbling through paperwork, let me guide your eyes to the newest blogroll Addition - Matt Keller of Blue Ice Aviation's blog. http://blueiceaviation.posterous.com/

I have no problems with saying that he is a better pilot than I am - and even better for you, he takes lots of pictures, and the occasional video of landing on a glacier! Also, he's still up in Alaska, and taking pictures of that great land. Go enjoy his real content, and I'll get some of my own up soon.
Posted by On a Wing and a Whim at 3:37 PM No comments: 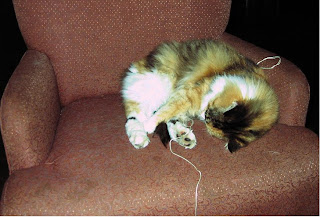 Nothing says self-satisfaction and happy bliss like a cat who's fallen asleep having triumphantly caught the wily string - and her own tail.
Posted by On a Wing and a Whim at 1:54 AM 6 comments: