I was incredibly lucky in my choice of parents and friends - my first experiences with rifles were fun, exciting, and happy memories that left me convinces that shooting is awesome, and blackpowder is the coolest thing ever.

However, I cannot remember the models of the blackpowder, bb, and various .22's that I shot as a kid - the only one that sticks in my mind is the one I now own, a CZ 452 that shoots better than I can. I adore it enough I've had no interest in finding another, so I remain ignorant of how other manufacturers and models rate.

So, I ask you, oh internet brain trust: what other .22LR bolt-action guns are wonderful for introducing young men and women to the joy of putting holes in tins and jugs, bringing home hares for supper, defending the garden from all invaders, and providing recoil therapy?

Herbs, rice, and isn't that nice?

Minor setbacks in the household: the basil grew too large for the pot, and is now dead of the frost. The cutting did grow roots, but died when transplanted into the old basil pot. That won't stop me from having basil! Ten days after plucking the dead cutting out, I have seedlings sprouting from the potting soil. It may take a while, but I'll have fresh basil soon.

The rosemary plant, on the other hand, has decided that sunlight, an occasional watering, and hydration via the dregs of cold tea mugs is the perfect recipe for doubling in size. We're going to have to start making more Greek dishes in self-defense. Perhaps I should scout for a sunny enough spot for a little meyer lemon tree...

I've heard about golden rice for years - the rice genetically modified to prevent birth defects / death from malnutrition in places where people mainly live on rice. I've heard lots of hope from folks who work with the developing world, and lots of screaming about how all genetic modifications are inherently evil from the "science is settled" crowd. I bet that it was either going to disappear into the black hole of aid projects that return little or get banned for scaring the environmentalism jihadis.

I was wrong - bags of it are now on sale in Costco, at a price point between basic white rice and organic white rice. The future is awesome. And delicious!

Tonight's project: drilling a couple holes in the kitchen trash bin, about three inches up the side, to permanently take care of the way the trash bag will poof out from the sides and need to be burped when I start putting garbage in.

Another Year, Another Flight for the Future

Operation Migration is on the wing again, leading a fresh batch of juvenile whooping cranes on their first migration to winter breeding grounds.

This year, you can follow their path down on a live cam (recorded segments also available, for when they've landed for the night / are waiting out weather.) Daily updates are also posted at their blog: In The Field With Operation Migration.

This is not going to be a one-time effort, not a click "like" on facebook and be done, but an effort of decades to rebuild and regain a species that was almost lost. So watch a while, learn a little bit about it, and remember that sometimes things take far longer than internet news cycles - but with dedication, determination, love and pure hard work, we can build a brighter future.

This made me laugh. Hope it makes you smile, too! 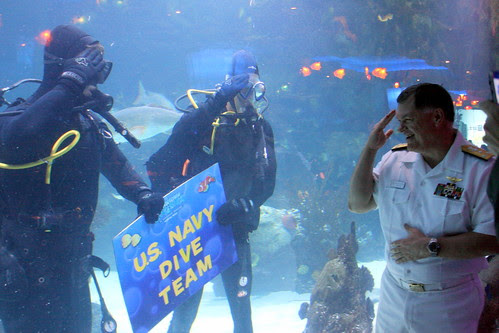 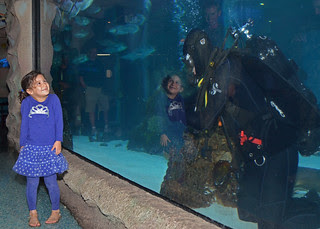 Officially, trick-or-treat was from 6pm to 8pm. I came home early, as Calmer Half is sick and not feeling up to facing the hordes. I was ready with the good candy, under the theory that too much is far better than running short, and if I'm planning for leftovers, I want candy I'll view as a treat.

It was a good year, and I met all the kids I've glimpsed up and down the street, as well as as quite a few from surrounding streets. My first visitors, right at 6, were my neighbors across the street. Their little monkey has just learned to walk, and he was toasty warm and utterly content in his costume. No interest in the candy, but great delight in holding onto the house and standing up, followed by four full steps toward the stairs before coordination gave out.

For those who worry too much about helicopter parents - I had lots of unescorted older kids, unescorted kids in groups with at least one older kid, and most of the mothers or fathers who came up to the door were with kids younger than six, or single female children. One packs of zombies and grim reaper(popular this year) had a mom watching from halfway down the driveway, and two dads with flashlights out in the street. I felt like teasing one dad that his jacket was not doing a good job of covering his holster, but settled for a grin and a wave.

Quite a lot of little monsters later, I found two women escorting a girl, all three in matching medieval fantasy princess costumes. I asked the narrowed eyes under the glitter-laden hair "And what are you?" Her - probably mother and probably aunt beamed.

I nodded sagely. "A very sparkly ghost. You have fun!" After inspecting me carefully to see if I was making fun of her, a small smile cracked through the scowl.

Eight o'clock came and went, and other porch lights on the street turned off. I kept mine on, because this is when the fun really begins. Now you get the children who are out of breath, running hard to hit every last house and stretch out the fun until the very last second of trick or treat is over. Kids with masks abandoned, costumes pulled up and unzipped for speed and cool air under all the fake fur and extra layers, panting out "Trick or treat! Thank you!" at the door.

About 8:30, as I was contemplating whether it was safe to wander off to the basement, the doorbell rang. One last pack of kids, accompanied by two moms, had clearly bailed out of a van where dad was patiently waiting. As I proffered the bowl of candy to "trick or treat!", the oldest boy looked at me with a hopeful expression as the others studied the candy. "One or two, ma'am?"
It took a second for me to understand, then I grinned. "How about three?"
"Really?"
"Really! As long as your mom doesn't mind." I looked up to catch a very motherly grin. With a look like it was early Christmas, they actually didn't dive into the bowl. They paused, considered, and weighed their options, moving m&m's, snickers, reeses, and such around to carefully consider when they could take three whole pieces of candy.
Then there was a cry of utter delight from one of the youngest girls. "At last! A twix!" She picked it up with the biggest grin of the night. "Mom, I finally got a twix bar!"
I considered. "Hmm. Let's see if there's another in here." We stirred the candy bowl, and one of the boys put a milky way bar back as another snickers bar came to light. "Wait a moment, let's check the rest of the bag." I brought out the quarter-full mixed candy bag, emptying it into the bowl.
"Oh, there's another one!" She glowed with happiness, and another boy hurriedly swapped something as well. "Thank you!" Belatedly, the rest of the pack joined in on the "thank you" chorus, though one muffled by the chocolate just crammed into their mouth. Mom #2, Mom#1, and I shared a grin, and I bowed to them. "You're welcome. Happy Halloween!"

All in all, a good night for getting to know neighbors, and getting called ma'am and told thank you a lot. The kids will be all right.