Pour some powdered sugar on me

Because my brain is as fried as a funnel cake.

I'm studying for the AGI - Advanced Ground Instructor - certificate, which qualifies me to teach flying on the ground. (Generally referred to by it's TLA (Three Letter Acronym), because the FAA (Federal Aviation Administration, though it used to be the Federal Aviation Agency, and prior to that, the CAB (the Civil Aeronautics Board)  sure loves its TLA's.)

I may have gotten into this on a dare. Not confirming or denying, just mentioning it's a possibility, and wasn't exactly a long-range plan slowly coming to fruition or anything. The first few sections of the study suckered me in. Okay, Aerodynamics & Aircraft rattled my brain cage and shook a lot of dust off some schooling I haven't touched in a long time, and force me to hit the books and start studying up on the actual principles that had become rule-of-thumb or "Ah, I don't fly that, so I don't care."(Look: I know a lot about flying off gravel and sandbars, and very little about turboprops. What we don't use, we forget, and it's a very big aviation world out there, with lots of specialties, too. Aerobatics? Those are things I don't want my airplane to do, not things I am comfortable or familiar with.)

But that was cool; it was a heck of a challenge, but actually pretty interesting to relearn, and learn ways the field has changed since I started flying.

...and today I hit Weight & Balance & Aircraft Performance, and it hit back. Nobody warned me there'd be calculus! Or spaghetti charts! ...maybe it was because I failed to ask. *facepalm*

I'm almost to the end of the first round of question study and review. I can do this. I really can...

After I go rotate the cat, mow the lawn, do some laundry, and whatever else it takes to get the brain to stop making crackling and spluttering noises.
Posted by On a Wing and a Whim at 5:46 PM 2 comments:

This recipe kind of grew and grew, because I started intending to use up 6 peppers...then realized I had 5, and so bought another 6-pack to make sure there were enough for seconds, too. On the one hand, I think I should have had a side dish, because the guests devoured the lot... on the other, they didn't appear terribly hungry after a small appetizer of devilled eggs and dessert of pie, so maybe it was fine.

And no, no rice. Not even cauliflower rice, because I wanted meat & veg peppers.

11 bell peppers - I used 5 green and 6 red/yellow/orange (Some folks don't like the taste of green)
3 Tbsp Olive oil or other fat, divided in 3 parts

1 cup parmesan, grated or green can

This is a time-intensive recipe. If you choose to make it with lots of pots, it can take less time, but I didn't want to leave a complete mess in the kitchen - so I had to batch things.

First, cut off the tops of the bell peppers, and take out the pith on the ribs. Chop the pepper parts off the tops before tossing the seeds & pith. Dice the saved pepper tops, and put in a pan with 1 Tbsp olive oil to saute until soft. (I actually used bacon grease, because I have it on hand.)

Rub the outside of the pepper bottoms with olive oil, and place upside down on a tray. Put in the oven and broil on low 5 minutes or until the tops are starting to blacken. (This way you don't have to blanch the peppers, and you can smush the pointier bottoms down to be stable when filling with meat. Also, nice flavour.) Be careful when pulling the tray out, because there may be juice now sloshing in the tray. Don't get burned! If you're filling right after, helps to take tongs and turn the peppers on their side or flip them over so the steam can escape and they cool off.

Back to the chopping board - chop up the herbs (or remove from their stems, then chop up), and the onions. Dump the peppers into a mixing bowl, add more oil to the pan, and add the spices first so they can bloom. Then add the herbs, and the onions. Saute until soft.

Dump about 3/4 of the mixture into the mixing bowl, reserving a quarter of the onion mix in the pan. Add in the cayenne and bay leaf, then the tomato sauce & balsamic vinegar. Stir to combine, reduce heat to simmer. Keep an ear on the sauce - when it starts to bubble, make sure to stir it so it doesn't splatter. We're not trying to reduce it, just mingle the flavour.

Add meat to mixing bowl. If your onion mixture is still quite hot, you may want to put on a pair of food safe latex gloves or similar, so you don't get any burns when mixing everything together by hand. Or, you could own a kitchenaid with that nice fancy paddle... or just use a spatula and a whole lot more arm muscle. Whatever makes you happy!

Arrange your now-cooled peppers in a casserole dish or two. Probably two; 11 is a lot of peppers. Fill with meat mixture. Turn off your sauce, and ladle over the top of each pepper. If any extra, just pour it over so it runs down into the base of the casserole dish / roasting pan / whatever you pressed into service. Sprinkle cheese over tops of peppers.

Cover with aluminium foil, bake covered for 45 minutes. Then uncover, and bake for another 20. The first traps all the juices to create a water bath and prevent the peppers from burning while cooking the dish, and the second reduces the juices in pan to sauce, as well as browning the tops and the cheese for tastiness.

Let cool 5 minutes, and serve with sauce... Or let your guests at them straight away, with the warning that it will be quite hot.
Posted by On a Wing and a Whim at 6:00 AM 2 comments: 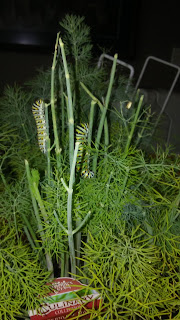 When do they become pets?

Then life intervened, and by the time I got to the greenhouse, all the fennel was long gone. So I got dill... and a packet of bronze fennel seeds were ordered.

It wasn't fast enough; the fennel is just putting out its first pair of true leaves, and the dill plant already has three caterpillars, hatched and hiding from the birds while munching down the herb. On the other hand, I'm not using a lot of dill, so I shrugged and ignored their existence.

Yesterday, there were only two left (probably bird), and I looked at the truly nasty weather incoming, thought for a minute, and then brought the pot inside, so they'd be safe. And then took pictures and showed them off to a friend. ((They're getting big. And are pretty!)

I'm going to take a test tomorrow. It's not going to affect my job, or my life; it's something I'm doing for additional learning and just because I want to. (A bet with myself may have been involved.) I know the material. I'm not worried about that at all.

So why, when I called the testing center, scheduled and paid for it, did my heart start racing, my lungs get all tight, my hands get clammy, and my adrenaline spike?

...Darn it, body, it's been over fifteen years since tests controlled your grades, and those controlled your student loans! Besides, the degree? It turned out to be less useful in getting half the jobs you've held than your pilot's license! You can stop going "Aaaaaaaaaaauuuuugh! TEST! Auuugh!" any minute now.