Pay No Attention To the Cat Behind The Curtain 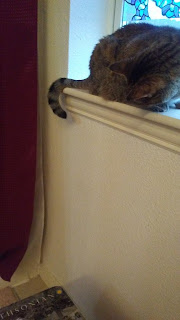 What you don't see is Ashbutt, hiding behind the shower curtain and periodically leaping out in ambush on Kili's tail.

...Which she keeps hanging off the edge and swishing back and forth so it taps the curtain....

Today, like yesterday, started with frost and climbed quickly with aspirations to hit almost 70. Roofing companies are out all over Tiny Town, taking advantage of nice weather to quickly fix shingles that departed roofs all over in the last bad blow. On the ground, contractors are fixing fencing with the brand new boards in sections looking amazingly bleached against greyed, weathered wood.On the highway, TXDOT crew are digging in the dirt in the median for some reason. In Itchy Paw Falls, electrical crews are digging like a pack of German Shepherds let loose to look for long-buried bones after the snow cover's gone.

So of course, I look at all this glorious earthmoving and decide it's a good day to start on the yard. I'd start on the garden, but Alma of Cat Rotator's Quarterly gave me the incredibly valuable rule of thumb for local weather: "If you start on your garden before the mesquite blooms... you'll be doing a lot of replanting."

Four bags of mulch replenishing the flowerbed later, and roughly 100sq ft. of hardpack red clay dirt broken up and mixed with compost, then a roll of mulch/stabilizer/fertilizer/grass seed laid down and cut to fit in all the patches it's being tested, and watered, and then more white rock moved, and potting soil and fertilizer added to all the herbs that overwintered, the overlooked branches broken up and tossed out...

I suddenly found myself too tired to make dinner. Yeah, maybe I ought to put off trying to build a square foot garden 'til next year; this yard stuff is work!
Posted by On a Wing and a Whim at 8:07 PM 1 comment:

Elsewhere, I was asked how I keep my cans organized, after I mentioned that we'd consolidated, grouped, and set the cans so we always keep 14, 8, or 5 or so on in stock. The first part of the answer is pretty simple, and it's cardboard organizers.

You can see 'em here: https://www.canorganizer.com/
But the principle is pretty basic; it's a cardboard box with an angled insert and a slightly-bigger-than-can opening at the back. So you pop the newest cans in the top of the front, and they roll down the length, drop to the bottom level, and roll to the front. This makes is very easy to do FIFO - First In, First Out, or "always use the oldest first."

(There are several inventory methods, but most practical setups default to FIFO or LIFO (last in, first out.) You don't want to do LIFO on anything that expires, because the oldest stuff gets shoved to the back. Copper plumbing parts don't care, but there's a reason the drink companies have set up racks that stock from the back and make it very hard to take any bottle but the oldest one in the front. And yes, when you google the terms, you're likely to get inventory cost accounting instead of inventory management, but that doesn't mean the beancounters own the terms.)

Now, which cans to keep in what quantities? Ah, that's the not-simple part! We started by taking what cans we had on hand, and stuffing them in cardboard organizers, and then at some point we filled those up with more of the same kind. Then we started getting the inevitable small pile of cans on the side - and some of those we looked at and went "Yeah, we get that a bunch" and filled another organizer; others are in the rack of one-offs.

(I very rarely make clam chowder. When I do, I need one can of clams. So I have one can in stock, but I certainly don't need 4 cans for something I make 2-3 times a year at most.)

Ideally, once a year we go through the cans - in reality, it's been closer to two and a half. But Peter took the time to go through the racks recently and pull everything that was expired or close to expired. The expired stuff got tossed - not because it instantly turns bad on the expiration date, but because it's stuff we got for a single purpose, and we haven't eaten enough of to turn over in years. The stuff close to expiration, and even the stuff far from expiration but that we realized we never used, got bundled up and given away. (With a few exceptions. The one-off can rack is a wire rack filled with "one of these, two of those..." for a reason)

The survivors? We had an interesting and thoughtful conversation about those. Most are "common ingredients in food" - like the rotel (diced tomatoes with green chilis. Very common.) Others are, despite being anything but keto, quick "I feel awful and want comfort food", like the chicken noodle soup. (Good intentions to keto are fine. When flu and strep stalks the household, the red and white can of instant comfort, just add boiling water, trumps good intentions.)  The third sort are common ingredients in easy, fast, good cooking that can be done even if we lose power... like canned beans.

Having lived in places where food supplies were unreliable, and electricity is usually unavailable right when fresh food shipments are, too... I am a very, very big fan of canned beans. They're delicious, filling staples that don't require clean water to soak, or the time and fuel to boil - the kind of thing that even if the flood water took the labels off the cans, sterilize the outside and you have good food waiting inside. Add some spice via rotel, and you have a tasty, hot, filling meal.

Please note: I am not recommending everyone copy the following list for their own. This is what I'm currently using and cooking with, as it suits my spice cupboard and cooking habits. Your own spice cupboard and cooking habits are likely very different from my own. But for the gentleman who asked, this is going to be a practical, real-world example of what can happen when you combine a love of cooking with a house with a large pantry. (And this is specifically my can racks, not my bottles or jars or bags)

*Grabill Meats. Rarely used because I have fresh and frozen on hand, but if I need to make something and either have no time to cook the meat, or have no power, these are really good canned meats.
Posted by On a Wing and a Whim at 1:09 PM 4 comments: