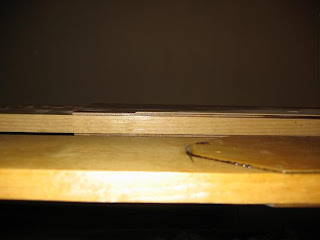 Things are never as simple as they seem.

The new spars have two reinforcement plates on each side instead of one, making them too thick for the ribs. Tomorrow, consultation and hair-tearing with the IA. Probably followed by rebuilding the ribs that go on the spars. (Sure not going to tear into those fragile, awkward, expensive pieces of wood.)

The land between glaciers 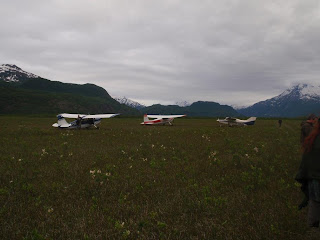 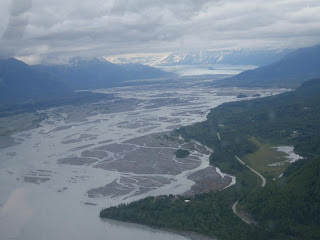 We went for a walk between glaciers: between the Knik glacier and the glacier-feed Lake George, skirting the shores of the lake. Once, the lake was much higher, much deeper, and prone to flooding out downriver as the ice dams broke. After the '64 earthquake, things changed, the glacier retreated, and the lake retreated as well.

Now, a few decades later, the lake is hemmed in by a terminal moraine, and where was once lakebed under sixty meters of water is now a dry, flat, level place with a thousand foot long runway worn into the dirt, dog-bone shaped with turnarounds at each end. It's the sort of place you can take even a nosewheel plane, to hike around. 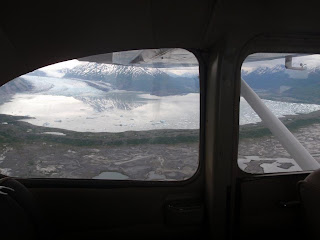 (Below, the looking north at the Knik Glacier before landing.) 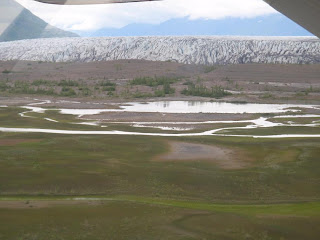 And so we did, in three planes, packed with nine people - of them, one born and raised here, most of us come by choice, and two visitors playing tourist. A nosewheel Maule hauled four, the Cessna 180 brought three, and the Citabria came fully loaded with two people on board. After several passes to watch for traffic, check out runway conditions, watch someone else land first, and decide everything was good, we touched down as smoothly and firmly as if it were a groomed gravel runway, taxiing to the end to pull around and park. (When operating on gravel or off-airport, it is extremely important to keep in mind where the wind and your prop wash are blowing the dust cloud behind you; your own dust trail can close the strip. It is also extremely rude to dust other people and their planes, if you have an alternative.)

Gathering to watch the last plane land, we decided to hike up the moraine that formed the rimwall of a higher Lake George, and set off on one of the clearer, low-brush parts. On the way, we found evidence that the land still shifts and cracks, moving underfoot; three laid-in tie-downs stood a ways off strip, separated by several gullies and quite impossible to land near or taxi to now.

The predominant plants are dwarf fireweed on the dry mud, reeds on the wetter, lower portions, and willow scrub (it's a low thicket bush here, not a tree), with alder scrub as well. Even with fourty years to grow, few things are higher than a tall man - the growing season is short in air chilled by the glaciers, with constant wind and sunlight blocked by the tall gorge's mountain walls. Not much grows here, and few things live here - the odd moose or bear wandering off the mountains on each side, but the dog didn't even give the slightest sign of scenting a rabbit.

Down the other side, we walked among the driftwood, asking the scientist among us if the wood there had been torn off the glacier in its passing from hillsides recently or been frozen in hundreds of years ago - no real way to tell, but that there was a lot of driftwood at the base of the glacier in a place where there was no other source for those splintered logs. So we stood, and talked, skipped rocks, shot each other's guns, and went hunting for the remains of a decades-ago downed airplane before stopping to share food. (It appears someone else salvaged everything since.)

On the way back, we encountered dwarf fireweed full of butterflies closing up their wings for the night - under the high overcast in the subarctic near summer solstice, it was impossible to tell the time by the light. So we went on up the glacier valley to Tuition Strip, so called as it cost someone a semester's tuition when they tried landing when it was still slick mud and wet lichen, not yet dried enough for traction. There was a still-muddy patch near one end, and though the runway had been thoughtfully marked off at lengths with bits of surveyor's tape, it still needed some work to make the heaviest and ground-hugging craft comfortable. So, we formed lines to walk down its length, pulling small willow scrub growing there, leaving a smoother, more prop-friendly strip behind us. 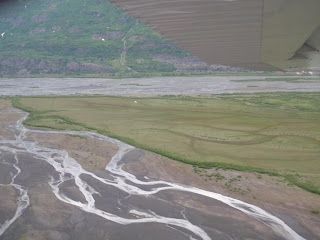 As it grew later, and the wind less, the mosquitoes came out - and so, we took off and went back to Birchwood for the night. 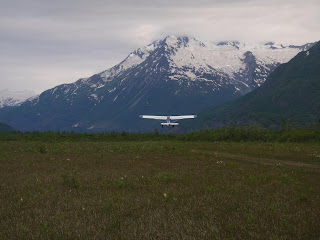 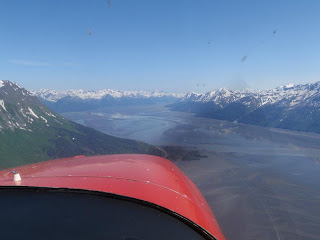 Turnagain Arm is the ocean arm that forms one of the three arms of the triangle that is Anchorage. The other two are the Knik Arm, and the Chugach Mountains (Seen on the left in the photos.) 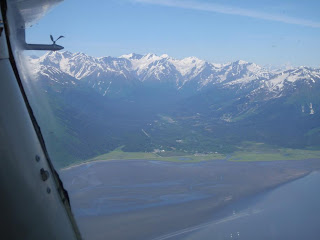 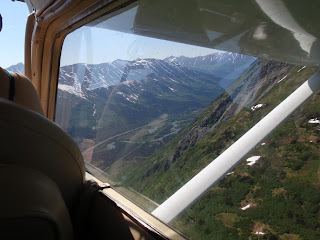 Proceeding to the end of the arm, turn right and follow the road toward Seward. The pass is narrow at points, and prone to sharp turns. 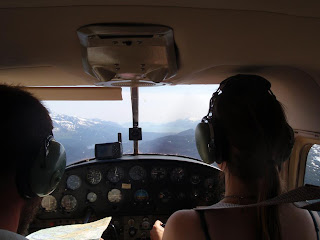 Watch the road carefully; the first split is to Hope, the second to Kenai/Homer. (This is why Kenai is 30 minutes away by slow supercub flight, and at least four hours behind the RV on the road.) 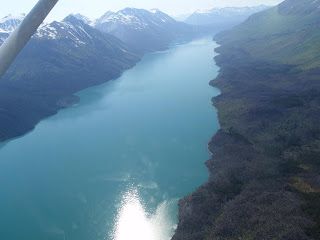 Kenai Lake - if you'd taken the faster way instead of following the road, you would have gone down the west side of the mountains and cut through over this lake. Welcome to Seward. Try not to deride the tourists who gawk at you eating ice cream; a lot of them waited all their life to see this place, and they're paying good money. Smile gently, point out good places to eat, and head on down to the boat ramp to make sarcastic fun of other locals trying to back up trailers and pull boats out.
Posted by On a Wing and a Whim at 9:32 PM No comments:

The engine was making the odd little noise it does when it's low on oil, so I stopped at a gas station off the main drag on the way home after a good day. It was well past midnight, I was tired, aching, stiff, mildly smudged with grease and dirt, and freckled with mosquito bites. The western sky was still ablaze with the remnants of sunset, so I didn't feel like I was out too late when I clumped into the gas station in a tight-clinging scrap of a shirt, low hip-hugging jeans, and boots I hadn't bothered to bend over and tie. One of the double doors was pretty well blocked by a lovely black girl dressed in not much who scowled fiercely at me and hunched over the atm as I pulled open the other door and wandered over to the aisle with the oil. The guy behind the counter grinned at me as I clumped up, and cheerfully rang me up as we exchanged pleasantries.

On the way out the door, I dodged between a hood hunched over the atm and an a police officer coming in - they nearly managed to block the door altogether. The officer and I nodded to each other, and he returned my friendly smile and nod with a sudden one of his own breaking out. "Hey!" He greeted me in passing, and I grinned back.

As I lifted the hood on my car, I racked my brain trying to place him, then mentally shrugged and concentrated on putting the oil in the engine. When store door opened, the officer stepped out with a bag in hand, and came over to my car. I looked up, and he smiled. In the tone of someone who just found an opportunity to ask a question he'd been wondering, he said, "Do you work at both [my aviation job] and [Aviation Repair Place]?"
"No, [Aviation Repair Place] is my IA who's helping me put my Taylorcraft back together." I grinned, shaking my head.
"Oh!" He looked enlightened, and nodded. A little small talk later - him asking if my car was all right - we wished each other good night. He headed back to his patrol car, while I closed up the hood and headed home.

It happens to me when I head downtown with a friend for beer and watching the sunset, when I buy groceries, when I'm on the other side of town getting some clothes, when I'm in a group of friends getting pizza and having a good time out, in the jury pool, in line at the post office... but getting recognized at 12:30 in the morning in a gas station off the main drag? I just have to give up and laugh, and swear to never let anyone put my name on the internet, because I've got so little privacy as it is.
Posted by On a Wing and a Whim at 1:19 PM No comments: