Fire in the sky!

Yesterday, we sent men up into space again!

Sure, the news is trying to focus on the highly organized and funded riots (with craigslist ads for paid rioters posted ahead of time, and pre-positioned pallets of bricks with people directing "protestors" to pick up a brick as they headed in...)

But that's temporary stupidity by ideologically blind idiots who think that if they recreate the summer of '69 with an overhyped and underperforming pandemic and astroturfed riots, they'll get the power they want. Ignore that mess on the ground. If we're going to redo '69, we're redoing the very best part, with men going up to orbit!

...and this time it's commercially, which means it won't stop if the next presidential administration and congress cuts funding. This makes me very excited, because single-planet species are at great risk of ceasing to exist. We need to get outa this place... I'll take the moon, but Mars would be better. Got an exoplanet that's earthlike yet?

By the way, SpaceX is still running live feed today as they're taking the opportunity to wring out hte Dragon with automated and hand-flown maneuvers. Because it is a test flight, and those two test pilots have got a whole lot of things to check out, while engineers on the ground await their data impatiently.


We'll get there yet! We've already gotten the first step down!

I wrote something new... 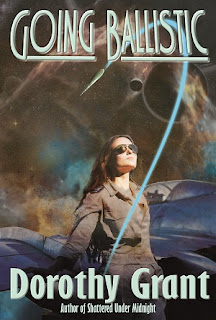 Now I have to write a blurb. Um, What's the story about? I just wrote tens of thousands of words exploring that. Um. It's about a ballistic pilot, and the absolutely terrible day she has when her own government tries to shoot her down. It's about the "military advisors" the Other Side is sending into her destination, because cold wars always have hot spots. It's about how, if you bleed a country with taxes and regulations until they can't survive, they will declare independence from the trade union just to stay alive.

It's also about learning that getting what you want doesn't mean you got what you need, and learning to ask for help, and to swallow your pride and start over. And about L-shaped ambushes and ground-to-air fire and how nobody loves linear assaults. And crusty cantankerous curmudgeons with hearts of gold.

And that, just because you've been in a field long enough that all the romance has rubbed off and you're well acquainted with the suck, doesn't mean you don't still love it anyway.