The Airport/Facility Directory vs. the Alaska Supplement

The major differences comes after the section with all the airports, their lengths, frequencies, surfaces, and misc. remarks comes a whole lot of really interesting information, a lot of which falls into the "I really wish I knew that!" or "where the heck do you figure that out?". It contains the approaches and departures to get into and out of Anchorage's spaghetti-bowl airspace, what frequencies to use over what areas, reporting points for common sightseeing areas like Denali or Knik Glacier, how to get out of Skagway, that overflying downtown Talkeetna is a bad idea (they get irritated), etc.

There are other uses for this small paperback book. Firestarter, toilet paper, a bright-colored marker for judging the halfway point on a short dirt strip when you're not sure if you can make it off (not that I'm advocating littering, but it beats to flinders crashing!) But the best one I've heard so far was a supplement with "STAY HERE. DON'T MOVE." written on the back.

An Australian hiker got lost, and wound up about 6 miles off trail very far off the road system in winter. He'd fallen through ice and gotten soaked in temperatures well below zero. Finding him was "like finding a needle in a hay-stack." Once the pilot found him, he took his supplement, which is a very bright color against snow, wrapped some surveyor's tape around it, and tossed it out the window. When they got there on snowmachines a couple hours later, the hiker had wisely followed instructions!
Posted by On a Wing and a Whim at 1:35 AM No comments:

Why do you fly? As much as Saint-Exupery wrote of the freedom from the tyranny of petty things, he had a cargo of mail to deliver. To the plumbers, electricians, miners, welders, and carpenters of Alaska, their plane is a vehicle to get them to their clients and the job site. To the construction companies, the geologists, the surveyors, the research scientists, policemen and fish and game wardens, the plane is both another tool and transport. To the commuter on the road system living with his family where housing is affordable, the plane cuts five hours drive around an ocean arm to a 45-minute flight across it. To lodge owners and guides, planes are the only way to transport their clients and their supplies, and to Native Alaskans who have left their ancestral village and come to the city to work, the only way home is to be flown. To many Alaskans who depend on fishing and hunting to supplement their diet, or for their entire diet, airplanes can take them to where the caribou herds are, or to the salmon runs - no longer dependent on foot or dogsled to get to the food, they can raise their families without famine.

In car terms, the airplane is usually the pickup truck of Alaska, not the candy-red convertible. Like any work truck, the owners of Alaskan airplanes prize utility, the ability to get into rough places, and to work in all terrains, under all loads, in all flyable weather. Airplanes with high wings that clear brush on narrow strips, often have tailwheels for increased short field and rough strip takeoff and landing capability, can work reliably from 80 F to -40 F, and can haul loads from sea level to mountain passes four thousand feet up, are the planes in demand up here. They fly planes from the Citabria to the Cessna Caravan, but rarely will you see a Cirrus, Mooney, or Lear up here. Most of these airplanes are roughly forty to fifty years old, and their avionics are rarely replaced until they no longer function - if, with the rest of the electrical system, they weren't ripped out to save weight.There are a good number of airplanes out there who have a handheld for an avionics system, at best with a cable running to an external antenna. Like most working trucks, the owners cannot afford expensive replacements - if they could, they'd get something that fit the exact same criteria with more hauling capacity.

Upgrading these planes to a modern IFR-capable avionics package will usually cost more than many of these airplanes are worth, which makes as little sense as putting cutom wood and leather interiors on a flatbed hauling freight. These avionics are designed to be cared for, usually only rated to ten degrees above zero - but they'll be sitting on the ramp and flown in temperatures far colder than that, and exposed to glacial silt, sand with a sifting of volcanic ash, dirt and dust every day - an environment they are as ill-suited to as a shiny new laptop on an old John Deere tractor. They are also expensive to maintain, requiring a new databases every 28 days, system checks every two years, and time on the engine practicing holds instead of going places and making money to maintain pilot currency

FAA officials new to this state try to avoid economic reality by pointing out how much safer they believe IFR flights are compared to scud-running, and by stating that all traffic in the IFR system is controlled and cared for. However, the lack of oversight and government control isn't what kills pilots; poor decisions by pilots in the face of the weather and terrain kills pilots. So-called "scud-running", ded reckoning, and mountain flying are skills that must be learned, practiced, and used wisely to be safe. Trying to fly low and slow without an understanding of your weather, terrain, and airplane limitations is akin to taking an average cell-phone-yakking driver and putting him in the next heat on a raceway track.

If you ask an Alaskan pilot why they don't fly IFR, though, the usual response has nothing to do with money in the wallet or the well-developed skills to fly without needing IFR. No, they focus immediately on the thing that'll kill them: Icing.

All icing can kill you, and will if you don't GET OUT. Even the lightest icing changes the airflow over control surfaces, lifting surfaces, and airframe, decreases lift, robs power while gulping more precious fuel to stay in the air, increases stall speed to an unknown (but definitely higher) speed and generally combines to ruin everyone's day. Forecasting it and finding it is an art and a science, but all it takes to make icing is cold air (or a cold-soaked surface descending into warmer air) and moisture.

The higher you go, the cooler the atmosphere gets, until you'll inevitably get cold enough air, anywhere on the planet. Icing levels are very, very high at the equator. In summer, in the lower 48, they're plenty high enough to let many private pilots go about their flights in and above the clouds. As the year progresses, they come down, until we experience ground-level icing, like frost and winter. At poles, on the other hand, the icing level is down to the ice cap. In the arctic and sub-arctic, not that far away from the pole, the icing level is often not that far away from the ground. In summer, icing can still be at five thousand feet.

"If you're going to find icing," pilots say, "you're gonna find it over the mountains." Mountains are physical barriers, lifting moist air when wind hits them, mixing and roiling air, cooling it over glaciers, cooling by lifting, or cooling by expansion after the moist air has screamed through the compressing funnel of a mountain pass, all of which create plenty of opportunities for ice at lower altitudes than forecast. Alaska has many mountain ranges, and to pass between any two major or minor population centers, you must go over or through the mountains.

IFR routes choose to go over the mountains, requiring both a Minimum Obstacle Clearance Altitude (MOCA) and a higher Minimum Enroute Altitude (MEA) on each airway, to provide communication via repeater with air traffic control. To maintain line-of-sight communication with ATC through a repeater, in a state that has North America's highest peak, the MEAs can be higher than the service ceiling - past the performance limit of most of the aircraft in this state can fly. They will, as well, be at or above the icing level for most if not all of the year.

So, when a pilot has the choice between taking an affordable plane modified for the working environment and using the navigational skills adapted to that environment he has been taught, or spending more money than the plane is worth while reducing payload and performance in order to navigate airways high enough to kill him with icing at almost all times of the year, the choice is obvious.
Posted by On a Wing and a Whim at 5:34 AM No comments:

Right wing is trammelled. My mentor and A&P with Inspection Authorization was going to use that authorization, with his wisdom and judgment, to inspect the wing Saturday. Unfortunately, Saturday he sounded like Death on burnt toast and was too sick to get out of bed. But moving forward anyway - Flying Buddy and J of Call to Wings came by, and when I aired my crazy idea of moving the wing up against the wall and putting the other one together this week so my IA would have to wings to inspect, Flying Buddy actually has the power tools and the know-how to take scrap wood left from building sawhorses and knock together impromptu solid supports to hold the wing vertical. I immediately set about baking banana bread for him as soon as he left with the wood. Yay for friends!

A note on the scrap wood now storage rack: this is yet another example of the prime rule of restoration: NEVER THROW ANYTHING OUT.

As soon as J has the free time, we'll lift the wing off, secure it, and start on the left wing. I expect several "Hey! Where did we put this part? And where did we stick this? And did we use all those length bolts on the right wing, or do we have some left for the left?" moments ahead.

Building on the experience of others, I shall keep in mind the wisdom passed to me: "You are building symmetrical wings with identical parts. Lay out your parts carefully, or you'll end up building two right wings, And Don't Ask How I Know."
Posted by On a Wing and a Whim at 2:48 AM No comments: 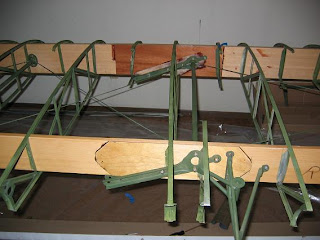 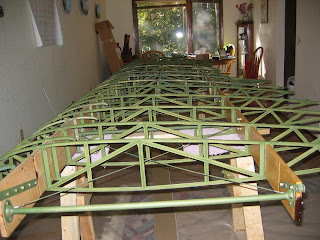 Getting there. Trying to hold onto round wires while tightening nuts that are grudging and grumpy about turning is a pain the the... fingers. Did I mention that the way these things are made, if you simply turn the wire, you screw in the nut on one end, and unscrew the nut on the other?

I want to go outside and play... 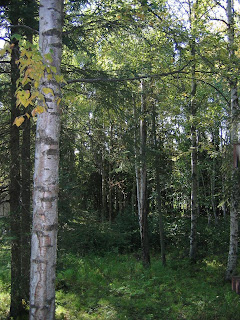