It started with a conversation about comfort foods. I made the mistake of opening my mouth and mentioning Moroccan food being "soul food" for a friend, and therefore the obvious choice to repay him for helping move a couch. Next thing I know, someone is laughing about the time she and her husband visited a country elsewhere in the Med, and she kept having to remind him that he'd officially never been there before when he mentioned places near their path of travel that had great food.
And then said husband heard me discussing tagines, and turned puppy dog eyes on his wife. Next thing you know, I'm loaning her my Food of Morocco cookbook, and she's ordering a proper tagine... and rather than order preserved lemons off Amazon like I did, because we're way out away from big cities here where our men can have clear fields of fire and nobody breathing their air, she decides to go whole hog and make the preserved lemons.
Did a good, job, too. But this temporarily left me with an embarrassment of riches in the form of preserved lemons, and without my cookbook that had the recipes to use them. So, I poked the internet, and it delivered. Some suitable modifications later, Calmer Half really wants me to record this for making again.
Ingredients:
1 premade pie crust. (I actually used phyllo sheets sprayed with olive oil, because I had them and didn't have a pie crust. Worked great, and will do again. But a pie crust is less effort!)
2 7-ounce cans salmon, drained (The cats were thrilled.)
1 diced onion (I actually used 1.5 cups blanched leeks, chopped, because I had it. Next time, onion.)
1 steamable bag broccoli & cauliflower mix, microwaved, drained, and rough chopped
1 cup shredded cheese (I used an asiago / parmesan blend)
1 cup milk
4 eggs
3 cloves garlic, minced
1 preserved lemon rind, minced (At least 2 Tbsp of minced rind. Rinse before mincing!)
1 tsp dried dill
1/2 tsp salt
1 tsp black pepper

Pop the steamable veggie bag in the microwave, so it has time to cook & cool during the next step.
Pull out 8" casserole dish. Hit the phyllo sheets with olive oil spray, layer into a crust all around the casserole dish until thick enough for you. Or make your life easy and just spread a premade pie crust in the dish. If it doesn't cover, oil the sides where it might stick to prevent that.

Preheat the oven to 425F.
Chop salmon, dice onion, and rough chop drained veggies. Add to casserole dish, layer with cheese.
Mix everything else in a bowl, pour on top. Stick a loose layer of aluminum foil on top to prevent crust/phyllo from burning, stick in oven for 50 minutes. After about 30 minutes, if you want browned bits on top, just pull the oven door open long enough to yank the aluminum sheet off.
Let cool 5 minutes, cut & serve.
Posted by On a Wing and a Whim at 9:48 PM 2 comments:

Elsewhere on the radio dial

It's not that I have nothing to say about Afghanistan, and the feckless, incompetent, arrogant traitors occupying the seat of our power.

It's that I am so angry, I don't have the words for it.

Fortunately, others do. Go here, for the most eloquent of primal screams of rage at all that has been wrought, and is yet to come. Read all the way to the end, or you'll miss the kicker.

I love my beta readers. They're awesome people, from all random walks of life. Sometimes I scratch my head and wonder why some of my more curmudgeonly guys put up with the romance in the books, although I never wonder why the ladies don't mind the body count (See Kipling on the female of the species).

But sometimes, they really do me a solid. Not just the cell phone picture after picture and explanation to explain how a diesel engine works for the research that goes into making sure I understand, despite it only coming out in one line of the story, which I really appreciate. Not just wading through the rough draft, and teasing me about all the words that escaped the spellcheck like colour and honour.

This week, one was just beyond awesome. I accidentally, when I had too much blood in my caffeine stream, sent two beta readers the wrong story. Instead of sending them A Perfect Day (With Explosions), I sent Blood, Oil, & Love, which is going through formatting for print and about to be released.

He didn't tell me I'd messed up. No, the first I knew about my mistake was when one sent a report back, with a few wily typos that had escaped many rounds of copyediting, and a few sentence fragments that had crept in with the last round of editing despite the copyediting afterward.

So, yesterday was the abrupt yanking that draft, fixing it, then handing back to Calmer Half to restart the formatting again (sorry, love!), and after profuse thanks, sending the *right* story to them.

Went out this morning to beat out a rug against the brick, and found one of the butterflies had completed its metamorphosis and was getting ready to fly! 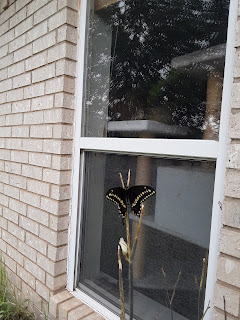 Followed soon after by butterfly #2. 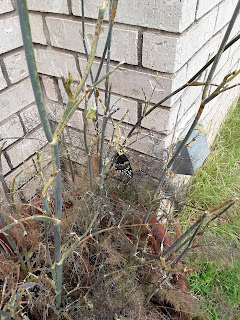 May your year hatch great plans, and great successes, too!

Some friends grow flowers. Me, I grow butterflies and barn swallows.

I've managed to keep the herbs alive this year, but efforts at actual flowers still defeat me. On the other hand, the fennel plants I got with the express intention of have someplace other than the dill for the swallowtail caterpillars to do their munchy best have 4 brilliant green chrysalides and 8 more caterpillars in various stages of growth hanging onto the feathery fronds and stalks.

As for the birds, we have a pair of very persistent barn swallows who think that an alcove on the house is the perfect place for a nest. Hard to argue with their point of view, given it's fairly sheltered from wind and weather, with clear approaches for flight paths. I argue anyway, but this year, I looked at them when they arrived yet again, and in the space of a week in which I wasn't paying attention, built a fine new mud nest. "Fine! You eat your body weight in mosquitoes. Keep doing that, and you can stay this year."

They stayed, the were fruitful and multiplied. Twice. I didn't realize the little buggers could have a spring clutch and a fall clutch, but after watching the hilarity of adult swallows giving fledglings flight lessons, there was once again a cheeping noise, and now there are three fuzzy little grey chicks. Okay, this week they've gotten their first adult feathers, so they're not quite as fuzzy as they used to be. Still, that's got to be a crowded nest at night.

So, I grow butterflies, and barn swallows... and books. Getting really close to the end of A Perfect Day (With Explosions), and then I swear, I'm going to buckle down on getting Blood, Love, & Oil out the door before the end of the month.

It's not flowers, but it'll do.