Two days ago, Calmer Half made a comment about my new sneakers being in need of a washing. And then went and washed them. This was a new concept to me; I've never washed shoes before. I just get them out of the box and wear them until they fall apart. While they were drying yesterday, I wore my older pair to work - sneakers that have survived several years, an aircraft restoration, cross-country trips, camping, shooting, work on other aircraft, civil war shoot, and all the other parts of life that I wasn't wearing boots for. They're halfway to falling apart, and I only keep them as a backup pair now.

I grinned at him and made a facetious comment about him washing the old sneakers, too. Note to self: don't bluff with Calmer Half. He doesn't bluff. This may explain... a lot of things, actually, including the way he gets dogs and dogs in human form to back off.

He came upstairs not that long later, and with a look somewhere between baffled and amazed, informed me that the water in the washing machine had turned black, and that the first wash had "left a tide-ring! What did you get on those shoes? Crude from the Exxon Valdez?"

I tipped back in my chair, frowning thoughtfully. "Well, actually... you know, if you go to any of the beaches where the spill happened, and dig down, you'll still find the crude. And I did go down to the shore and get a fair bit of mud on them when..." I was thinking in the parts-per-billion technicality, but I don't think that's how he took it, as he turned and went back downstairs with something that was either a huff or a sigh.

When I lived in Alaska, I had the great fortune to have a friend and former roommate who was not more talented mechanically as me, but also a genius at working in textiles. I can rib-stitch an airplane's wing together, but Jeannie - Jeannie can raise both eyebrows, make awesome Irish coffee for three, ponder, grin mischievously, check with a measuring tape, and turn some leftover fabric from making a beanbag chair into an awesome urban fantasy fairy outfit that will hold up to years of clubbing and parties... in time to go from "Hey, I guess I actually do have tomorrow off work, but I don't have anything to wear" to rocking the Halloween party.

She made the bridesmaid dresses for her own wedding, and it's one of the few dresses I keep as standby for future formal occasions. While I express my dreams in AN hardware fittings, she can turn a pair of jeans with a hole ripped in an unfortunate place into my prettiest pair of jeans I've ever owned with a butterfly embroidered on my behind (and a heavy-duty cloth patch inside, to protect against further countersunk screws.)

Now, you too can see what random projects come from her creative mind and hands - ok, the fabric ones at least, not the moose-proof garden fencing with the beautiful minimalist wooden frame, the shipboard-inspired doghouse, or the awesomely painted Warhammer miniatures, but you never know what she'll come up with or show you next.

So check it out! bonifacethreads.blogspot.com
Posted by On a Wing and a Whim at 6:50 PM 4 comments:

This pretty well describes my job, although, I don't work for EDS.

Here's the hardest part, the source of all my problems: math is merely a language we use to precisely describe the universe around us. It represents many precise things, some accurately - but it is not reality, merely the language we use to describe reality. For each number I deal with, there is a customer somewhere who wants something. And customers are people. For each number in the system, there are employees working to move product to that customer. Employees are people, too. I speak the language of math all day, in every tool, but the moment I forget that the entire systems is built by people, run by other people, for the benefit of yet more people, all the mathematical genius in the world will not save me. Every number I change represents people being told to do something - and there is no formula in the system that can turn an equation red to warn me I'm going to frustrate people, and frustrated people work more slowly. There is no tickybox I can check to improve morale, but improved morale will definitely show in more things happening faster. Mentoring shows as a slowdown in efficiency - a highly efficient person is doing less of their own work - but that slowdown pays off by greatly reducing error rates forever after down the line with the person mentored.

Now, I'm out with my people. I'm running - literally - around trying to account for all sources of critical or urgent (or critical and urgent) errors, and make sure that as the work scales, the errors will not scale correspondingly (or logarithmically). I'm answering questions from the newest employee trying to figure out his break time to the project manager wanting to know status on major department goals, while trying to actually do my job description. The more people we hire, though, the harder it gets to know all my people, and know all the problems, and anticipate what people will do.

But sooner or later, I'm going to hit the limits of my brainpower. You see, I'm human. I can only hold so many things in my mind at one time. I won't get smarter as the problems get bigger. I can delegate parts of problems, but delegation means training and trusting that a subordinate will know how to handle everything they're meant to, and when they're not meant to, and how to deal with the things they're not supposed to handle or fix themselves, and the consequences of taking initiative. That only works so well... I mean, Jesus chose twelve disciples, and one of them was a saboteur, one denied any affiliation, and ten ran from the pressure. If God incarnate in flesh couldn't find and train 12 people to do what he wanted, there's no hope I'll ever have a perfect team. The Catholic church claims direct apostolic inheritance, and we see how badly they've screwed up over the years. No matter how hard I try, sooner or later, I can't control it all, and if I try, I won't be able to respond fast enough... and no matter how hard I try, the customers are going to do whatever the customers want to do when they want to do it, and no plan can simultaneously keep us at top efficiency for lots of customer demand and little customer demand.

There's only one solution - and it's the long-term, time-intensive one. Train people to do the best job they can, educate them on the common errors and how to fix them, and then give them incentives to work as hard as they can, while getting out of the way and letting them thrive. No matter how seductive the statistics, no matter how simple the mathematical solutions seem to be, it's not numbers or turtles all the way down, it's people... and that's why we have to put our money on Adam Smith's invisible hand(1), on free-market and free will, not command and control.

(1)"But it is only for the sake of profit that any man employs a capital in the support of industry.... As every individual, therefore, endeavours as much as he can... to employ his capital... that its produce may be of the greatest value; every individual necessarily labours to render the annual revenue of the society as great as he can. He generally, indeed, neither intends to promote the public interest, nor knows how much he is promoting it... By directing... industry in such a manner as its produce may be of the greatest value, he intends only his own gain, and he is in this as in many other cases, led by an invisible hand to promote an end which was no part of his intentions. Nor is it always the worse for the society that it was no part of it. By pursuing his own interest he frequently promotes that of the society more effectually than when he really intends to promote it."
Posted by On a Wing and a Whim at 4:29 PM 3 comments:

On the eleventh hour of the eleventh day of the eleventh month, Calmer Half and I had declared an armistice on our few domestic battles, and were on the road together. Does taking a vet to lunch count when it's my own dearest man?

Every few weeks, I get a desire to be up and gone - not running away from my home, my life, my work, my marriage, or my friends, but just a desire to be up and out on the road, in the air, flying free. Calmer Half knows the symptoms well, from the first time he woke up from a nap to find I'd wandered out the door and ended up in Vicksburg. (Alaskan Geek and Call To Wings could have warned him about that, from times we've headed out on a random drive that ended up climbing a mountain on the way to get coffee, or driving to Girdwood for ice cream, or Seward for dinner...)

Usually he just smiles and wishes me to be careful as I head out the door with headset and plane keys in hand - but today, I didn't want to fly away so much as to tackle a new direction together with him. So we were on the road, talking of novels and pointing out the fall color, and went to a different city just to see their zoo, which was small and didn't take long. After he had a healthy turkey sandwich and I had a grilled cheese sandwich, we satisfied the vague curiosity I'd had since first learning to read billboards out the car window, and finally saw Ruby Falls. Well, I went down and saw the underground waterfall (which is impressive, and the lightshow is beautiful, but I wanted to short out the mood-music speakers). Calmer Half decided he didn't want to walk a mile underground on uneven and slippery rocks and concrete patches, and instead climbed the tower to truly see the view of Lookout Mountain. We reunited for coffee and chocolate muffins on the porch, and then drove home.

It was a wonderful date, and a lovely little road trip, with few spectacular sights and lots of peace, love and contentment - and completely boring as that is to you, dear reader, by the scars and the shrapnel still embedded in my love, these are the precious moments. After all the guns are silent, the recoverable dead are buried, the burned ruins and overlooked mines a continent away... one of my goals in life is to make a marriage that is everything he hoped and dreamed of living for in the quiet moments between the firefights.
Posted by On a Wing and a Whim at 10:33 PM 6 comments: 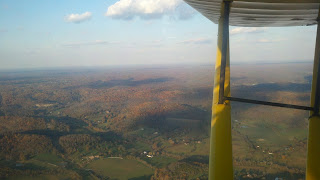