Laundry is one of those eternal chores that never ends, only pauses. Sometimes, though, the pauses are for reasons creative and interesting, like when the ambush predator you live with decides to move where the attention is... 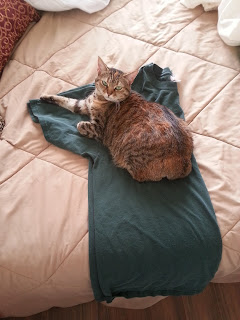 That's a nice shirt I got here, shame if something happened to it...
Posted by On a Wing and a Whim at 4:58 PM 3 comments:

There is something strange and wondrous about spring happening in February. Welcome to Texas! I have now gotten about as far away from Alaska's seven months of winter as is possible while remaining in the USA! (Okay, there's always Hawaii, but Texas is warm, and affordable!)

I am starting a container garden, because the prospect of starting a larger garden while dealing with owning a house and settling in, and starting a new job, seemed a little overmuch. Despite any husbandly jokes about Scarborough Fair, no, that wasn't what I was thinking when I started parsley, sage, rosemary, and thyme. And cilantro. And basil. And oregano.

I may have gone a bit overboard on the basil. I could only find it in seed, so I started two trays to see if any of it would take. Now I have twenty little pots with basil seedlings, and I'm thinking... pesto? Okay, I could thin it down, only keep a bunch or two... Or I could have a glorious profusion of basil. I might have to plant some in dirt, though, because that'd be a lot of pots.

One of the joys of living off a base is watching their pilots play while I'm sipping tea out in the backyard. Another is the delightful profusion of cultures for small-city Texas, including two Asian groceries. One of the drawback is the inevitable puzzling head-cocked stare at a complex chart on the small airport wall, trying to decipher just where the base does their coming and going, when, and how to fly around them reliably. Thankfully, there does seem to be an easy rhythym once you get into it, but "Just stay between the local TV station's towers and you'll be good" won't be incredibly obvious until I've flown a bit here.

Given a year, I know I'll get the rhythm down: where to fly, when to plant, when to switch from building a fire in the fireplace to grilling outside. Not yet, but it's coming. Strangely enough, though, when I find myself slipping and talking of "back home" when comparing here to there, I still mean Alaska, not Tennessee. Sometimes, I wonder if that'll ever change: I first really learned to put down roots there, and they dug deep.

Once upon a time, the cat was bored. As bored cats do, she demanded that her people play with her, and relieve the ennui of being a house-bound cat.

So her people started making boxes, and putting things in them. The trouble with humans is, they didn't stop putting things in boxes when she'd had enough of it. But she adapted, and decided that as long as they'd understood one demand, they could understand another, and upped the demands to go outside and kill the birds in the windows.

They let her out. But it was in a cat cage, and it was only to go to the vet. After getting a rabies vaccination, she decided she wanted nothing to do with outside anymore.

But the people, they're kinda stupid and slow about learning when to stop. And when they'd put everything in the whole house in boxes, they took her out again, and put her in the car, for hours upon hours upon hours. At the end of the day, they hadn't gone back to the house, either: they put her in a new place, with lots of strange smells. It was scary, but she had her people.

After a couple days of this, they came to a new house, with a new person, and she had her whole huge litterbox back instead of the travel stopgap. Life was good, and there were lots of new things to explore, and couches to climb, and beds to sleep on...

And then, before she could get bored, they picked her up again, drove a ways, and plunked her in a brand new house, with familiar furniture and all the boxes. She's decided boxes are the cause of traumatic change, and wants to be anywhere else when one of her people start opening them.

But time went by, and other than the forbidden garage where boxes still lurk, the house was almost unpacked, and back to normal. A cat could get used to this...

And then the people moved the living room furniture. She gave them the dirtiest looks she had ever learned, and swore a bit. Enough change! Stop that!
Posted by On a Wing and a Whim at 5:08 PM 3 comments: