Or, how my Calmer Half wins the fight we didn't have. Because old age not only brings treachery, but patience and cunning.

A few years ago, my love bought some kitchen jars for me that he thought were what I wanted. They were beautiful, with olivewood lids and silicon seals (things I like). They also sucked, because the lids come straight off when I pull up, so any attempt to grab from the top results in broken glass and spilled grits. Also, the mouths were too small to get a half-cup measure in.

So, rather than get more of them, I promptly started using quart and half-gallon mason jars for other grains, sugar, and ground flours. I didn't get rid of them, because I wasn't going to waste money already spent. Same reason for the mason jars: I had them, and why waste money when I've already got something that will do?

It wasn't an ideal solution, but it was the duct tape and safety wire solution of kitchen organization. My love got these lids for the canning jars to make it easier to pour, clearly designed to turn the jar into a sort of sippy cup, and they made it better. However, the flours still clump, and the much smaller hole means it's a pain when things clump.

A few days ago, my darling overheard the smothered yelps of pain and growl of frustration as I smacked the glass jar into an arthritic hand, and hurt myself more than it moved the clumped almond meal inside. I was grumbling (endemic to weather change and arthritis acting up, not this particular jar) as I then started rolling it on the cutting board to try to break up the clump so I could pour out a third of a cup.

He came out of his office and asked if he should get better lids, or more of the pretty jars instead? I recognized a "problem! fix problem!" air about him, and decided truth would be more useful than tact. Unfortunately, I didn't so it in a gentle, kind, or loving manner.

You might even say I attempted to bite his head off and gnaw on his jugular. My darling simply waited it out, like a stone calmly letting a wave break over him, as I snarled that I did not like either alternative, and did not want him spending more money to improve makeshift containers I already disliked in the first place. When I was finished, he simply asked, "What do you want?"

That was the right question.

I finished pouring the almond meal, and cradled my hands to my chest as I grumbled that what I really wanted were vacuum-sealed plastic containers, but I wasn't going to spend the money on them, which is why I was making do with the glass jars in the first place.

I got this puzzled look, completely ignoring the way I was snarling and focusing on the single relevant fact. "I've never heard of these. What are they? Can you show me?"

So I limped over to his computer, pulled up amazon, typed in kitchen vacuum storage containers, and then informed him that I hadn't done any research because I wasn't spending the money, and I was going to go get a painkiller now.

As I made a cuppa to take the painkiller with, I heard faintly from his office, "Ouch! Yes, I see what you mean about the price!"

I thought this would be the end of it, but no.

An hour later, he's in my office. "Love, I just sent you three links, to three different sizes. Which would you prefer in the pantry?"

As I was in much less pain by then, I was much calmer, and just looked at him with puzzled disbelief. "Love, didn't you see the price tag on them?"

He gave me this look like when I'm supposed to be somewhere in fifteen minutes, and haven't started drinking my tea or finding my clothes yet. "If I'm going to reorganize the pantry, then best we start with the containers we'll be using when we're finished. Decide what you want, so I can get that out of the way." As I opened my mouth to object, he shifted to a guttural tone of pure command. "You are NOT hurting yourself again."

...and that is how he preemptively wins the fights we don't have.

I've been sending snippets to Cedar Sanderson, as she's one of my alpha readers. About the point the team is far underground inside the ruins of an alien city, she sends me this feedback: 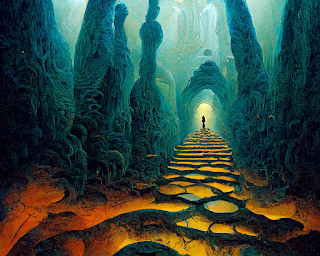