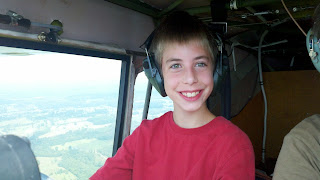 Note to self: when you put a boy on top of an Oregon Aero cushion and a PFD cushion, and stick a horse blanket behind his back so he's comfy and can see over the instrument panel, there is no real way to get the shoulder harness straps short enough to work. Must eyeball the setup and see if I can fix that before next flight with precious cargo/copilot.

Note to self II: Do not propose where you'll go until you've gotten up and can see the weather north of the airport.

Note to self III: Wearing shooting muffs so he can't communicate, perched on top of a stack of stuff, hazy day, unable to go north to the farm due to low ceilings... none of it matters. Look at this picture and stop worrying about it.

Note to self IV: Weather permitting, next trip is to see Dad's house, and the farm, in that order. Because we all know there's gonna be a next trip. And he's too young to demand gas money, does too well at his chores and in school to hold a flight out as a bribe... aw, I'll leave those negotiations up to his father, anyway. Well, maybe I'll demand to get to fly his RC airplane. Or some doves and rabbits when the seasons open. There's a new meaning to will fly for food...
Posted by On a Wing and a Whim at 11:01 PM