Where the bouncy balls went.

A long time ago, I read John Ringo's RavenCon After-Action Report. (the internet remembers in PDF) http://www.orthogonaltonormal.com/midden/RavenCon%202006.pdf
Go read it, if you haven't ever heard of it. After your sides are hurting from laughter, come back here to find out what happened to the bouncy balls.

Back now? While most of you will remember that AAR as an epic failure by feminists to ambush a Baen author, there were a lot of good pieces of wisdom in there. "Marketing is not sales. Marketing is a method for creating a precondition where sales are easier. To do that you have to create a positive impression of your product, in this case your books, and yourself. The most important point is to create an impression."

At every convention, there's a swag table, filled with bookmarks, business cards, flyers, and random sized cards inbetween, usually with cover art for a book, often with a blurb. Friday afternoon at LibertyCon, half the table was filled with free books put out by indie authors, hoping they'd attract potential buyers into the rest of the series, and just about every other square millimeter was filled with the aforementioned other advertisements. I played a form of tetris to make sure I wasn't blocking anyone else's advertisements, and added a handful of ours - cards with slightly cropped covers for War To The Knife (so I could get four in glossy photo quality on an 8.5x11 paper), with the blurb, a QR code directly to the Amazon page, and the URL for that page all fit neatly on the back. Each card was stuck into a plastic bag, along with a bouncy ball. 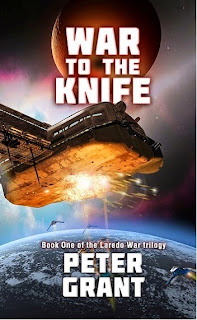 The bags were picked up by congoers over the course of the weekend. There were sightings - now and then, the roving crowd of small kids underfoot would be spotted bouncing balls down the halls or across concrete patios. (Calmer Half had one very cute kid come up at a signing and politely ask for one for her three cats. Being wise, he gave her one for each cat.) We never put out more than a couple handfuls at a time, but they went fast.

So, "did it work?" We gave out 175 pieces of swag, so yes, we definitely had something that caught the eye and got picked up. As for immediate sales, yes, we had a nice boost - though definitely not enough to cover the cost of the con. However, we were really going for name recognition. After several panels and a weekend of bouncy balls, there were a lot more people who recognized Calmer Half than people who immediately bought the book. This is awesome, because this is a heavily military sci-fi fan con. (They have an unofficial range trip on Friday morning, ok?) So these folks have now heard Calmer Half's name enough to recognize it vaguely the next time they go looking for something new to read - and that's enough to put us head and shoulders ahead of the mass of unknown authors.

And despite the bouncy balls, looks like they'll even let us come back next year!

...this still leaves 50 for the cat. I think she's already lost 20 under various and assorted pieces of furniture. Still, after several nights in a hotel, I look forward to my own bed and the predictable noises of "thump-thump-thump-scrabble-thump-scrabble" tonight!
Posted by On a Wing and a Whim at 5:24 PM