Guess what just came out? 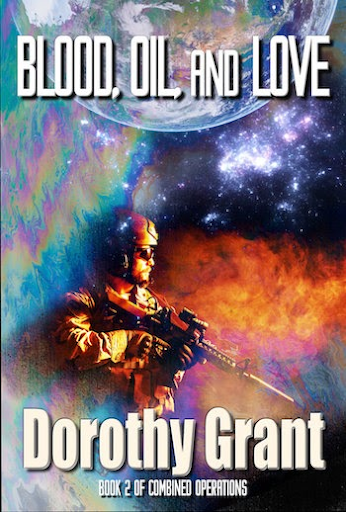 Funny story on the title: The working title was Like Blood for Oil, because one of the what-ifs that started my brain coming up for the story was "What if oil really was scarce enough that large countries would go to war over the ability to control a new field?"

You can't get that here on earth, but you definitely can when you're terraforming a new world. And I had a new world that already had resource issues thanks to a rushed terraforming, just waiting to be explored a little more...

Calmer Half objected to the working title, and I understand: there are a lot of people who are quite bitter about the idiocy of the slogan it was gently mocking. Rather than annoy potential readers, I changed it.

But I changed it to Blood, Oil, and Love. There's a comma after Oil, darnit.

So where did it go? Well, living with Calmer Half means that a lot of his Britishisms work their way into my speech. Writing an Empire based on 1800's Britain doesn't help. When I'm tired, I spell phonetically, and a lot of extra u's creep into words like colour and honour, and spellcheck most emphatically does not like that. So Calmer Half cleans it up in copyedit and "Americanizes" the manuscript. (This cuts down on the number of people complaining about my spelling to Amazon.) So, he took out the second comma because "It's Oxford, not American."

I happen to be a believer in the Oxford comma. I was long before I met him!

I already paid for the art with the comma, but he uploaded the book. Publisher wins!

Unless I can't stand it and re-upload with a title changed by one comma in the middle of the night.

In the meantime, have a crispy hot edge of a cold war, and eco-terrorists too indoctrinated to think about the stupidity of being anti-terraforming. Have a geophysicist who's in over her head, and a Recon who's finally caught the perfect woman, and is now wondering how the hell you keep one once you finally catch 'em. And a fairy God-Gunny Sgt, who would never be caught doing something as silly as waving a wand. Nah, he just knows a guy who knows a guy...

For your reading pleasure: Blood, Oil, and Love