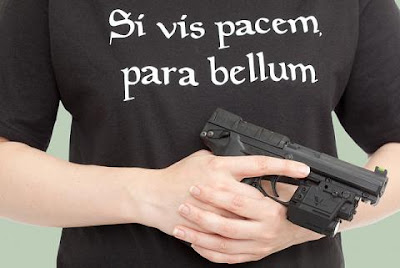 Thanks to Oleg Volk (Warning - not all pictures safe for work!), who is a wonderful friend and an awesome photographer, I've gotten to shoot the new Kel-Tec PMR-30 a few times, and it is a gun I liked from the beginning and love more every time I get my hands on it. Officially, the gun is a "$375 double stack semiautomatic pistol that has a 30 round magazine, chambered in .22WMR."

What that doesn't cover is that it's so light that even with my shoulder and neck injuries, I can hold it up, with a fully loaded magazine, and shoot it at full extension. It has no noticeable recoil - and given I've got enough damage I need ibuprofen after 70 shots with a CZ 452, and can't hold up most shotguns unloaded, this is really saying something.

But it gets better - the gun is not yet out in production, and over the last several months, I've noticed that if there's ever a problem - in concept, in clearance, in accessorizing - Kel-Tec will tackle it, and send new parts to try. Soon, if not already, there will be a threaded barrel option that will allow easy, quiet, lightweight firing for a nice time at the range with a gun that won't hurt anything - not even my ears!

There's only been one stumbling block - racking the slide. I understand that the myth of small women being unable to rack slides is just a myth, and Kathy Jackson has a great tutorial on how, while Breda has a fun video showing how easy it is. It's easy for a healthy person of any size, given proper form - but with the damaged shoulder, proper form means I go from having to get someone else to do it, to "I can do that for myself!" and wincing from the pain. Yes, I'm stupidly stubborn about being independent sometimes, and I thank God my husband loves me and puts up with it.

That, too, is no longer a problem - the designer of the PMR30 has now redesigned the hammer! For those of us who lack the arm (or shoulder) strength to rack the slide against heavy hammer spring, you can do it in two moves. First places it on half-cock, the second cocks it the rest of the way - and for a bonus, the magazines got re-designed for easier loading!

I can't wait to shoot it again - and when it comes on the market this summer, I don't think my Calmer Half will have any trouble figuring out what might be a birthday present - parts for the plane, ammo, or the only handgun that makes me squee.
Posted by On a Wing and a Whim at 3:07 PM