I know, I know. Ruminations on romance from a gal who's still tickled pink that her husband got her a Ruger Mark IV in steampunky bronze, and promptly declared it an early valentine's present. (Look those things are scarce as well-behaved kittens right now. I'm not fool enough to expect him to be able to find it right on St. Valentine's, and I didn't want to wait until the day to get it, either!)

I'm a woman. I like love stories in my fiction. I know, I know, a lot of y'all see the protagonist making puppy dog eyes and the gut reaction is just like the grandkid in The Princess Bride:


But I also grew up on Anne McCaffrey, Lois McMaster Bujold, Leigh Brackett, Andre Norton, and other Grand Old Dames of science fiction and fantasy, who believed in working love stories right in with the thrilling action. Who doesn’t enjoy fencing, fighting, torture, revenge, giants, monsters, chases, escapes, true love, and miracles? Or Princess Leia and Han Solo's banter, in the middle of space battles?

Unfortunately, from the 80's on, I saw a lot of emo navelgazing gutting the SF&F romance, and then wearing its skin, calling itself by that name, and demanding respect. It allied with erotica and romance that picked up the barest trappings of SF and declared itself part of the genre without any of the love for the ideas, tropes, or fans. (They seem like a movie crew directed to the wrong set who throw on the costumes, shoot faithfully to their script without exploring anything they've found, and then declare that they must belong to the genre and frachise who were supposed to be there.) This inevitably leads to heartache and heartburn, and giving romance a bad name.

So I wrote the kind of book that I love to read, but have a very hard time finding anymore. It’s set on a colony trapped in a crater while the terraforming on their iceball is failing. While the two factions have temporarily ceased their running civil war and are pretending to cooperate in order to install a weather station that’ll warn them both of killing cold coming down from above, things are never as simple as they seem! 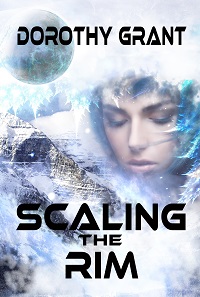