Yes, you can't go home again and it's partially my fault 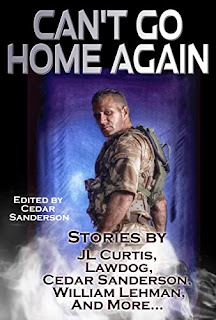 Like anybody else, I like to share really nifty, really useful, and really good things with friends.  Sometimes it's wine, or spices, and those close enough gleefully partake of the dishes offered. Sometimes it's the butterfly garden at the nature center, and Calmer Half is trying to figure out why the grown women including his wife are acting like 12 year old girls let loose in a store full of shiny, sparkly things when the air around us is full of bugs. (He prefers elephants, at a comfortable distance.)

Then there's the confounded look on his face as a certain senior NCO and I are making excited noises over her teaching her baby sailors the life hack of dance company hair clips (designed for holding despite serious movement) and mini (figurine) paints at the game store to match their hair colour and be invisible on inspection. Granted, he comes from a country with an all-male draft, so the very idea of how best to twist and braid hair to stay out of the way even with serious PT activity and long days is... well, quite literally foreign.

Often though, especially with friends who are widely geographically scattered, it's books. So when a book I've been anticipating comes out, I read it, and if it's as good as hoped, gleefully share it. Sometimes this is fiction in genres they don't read, or nonfiction in subject matter areas they don't care about, and they usually roll their eyes and humour me, knowing I do the same to them.

And then there was Arsenal of Hope.

In retrospect, while my friends are from all walks of life, none of them are anywhere near the sheltered end of the spectrum, and they've all picked up their own assorted scars along the way. So when I was enthusing over the joy of finding an even better working definition of PTSD than I'd used for years, and a whole lot more treatments, therapies, approaches, and coping techniques with a cheerful, rueful look at how they had or hadn't worked... Perhaps I should have anticipated that my friends were actually paying close attention instead of humouring me.

Look, I'm still not comfortable applying the PTS label to myself. But the first step to understanding even better what makes Calmer Half tick, much less most of the men and no few of the women in my life, was also the extremely uncomfortable first step to realizing why I do certain things. Or don't do certain things. Or have so much avoidance of doing certain things that it was plain as day to the people around me, and they figured I was perfectly well aware and just didn't want to talk about it.

I'm working on it.

It's led to more than a few raw, but cathartic conversations, as friends have taken my own struggle to bare their own emotional wounds in turn. This adult version of "You show me yours and I'll show you mine" sucks, you know? But better than not talking about it, and far better than suffering alone and in the silence behind the facade of everything's under control.

And given the number of friends who are authors, when we bare our wounds to each other, and finally let it out, we bleed fiction. Stories are, after all, a way of talking about pieces of the truths you can't say out loud with the actual names and dates, re-arranged for places that never were and people who are creations of a mind trying to process far more than our surface consciousness is aware of.

All fiction is a conversation - with our own subconscious, with friends, and with things that came before that we agree with, or more often violently disagree with. Alma Boykin can blame me for the running text conversation we had that took a orthogonal turn at "spell check", riffed from there into proofreading terribly-written academic textbooks on magic if magic actually worked, and... well, I have a weakness for bad puns and song lyrics. And in the first of her urban fantasy Familiar Tales, I can see some of both that we bounced off each other worked in as story and worldbuilding prompts.

CV Walter and I had a long, grousing conversation about the utterly toxic relationships that are being promoted as the ideal in much of current romance and urban fantasy (pet peeves of both of ours. We've also been in too many fights to have any patience for waif-like female characters easily winning hand-to-hand combat with heavily muscled, well-trained men twice their size.) She's currently writing a steamy scifi romance series... with competent women and men, And honest communication. And females wearing outfits with useable pockets. (As one reviewer said, the last is how she knows it's a fantasy, not scifi.)

After we both read Arsenal of Hope, Cedar Sanderson and I had long conversations about PTS from sources other than combat, which while it doesn't manifest in exactly the same way, it certainly rhymes. And so, too, does the process of healing. Including the suck of dealing with the demons in your head, that you can't cut off or leave behind like twelve inches of hair or the exes in another state.

And somewhere along the way, one or the other of us groused about the lack of honest representation in fiction of what PTSD's actually like... and of fiction that showed moving forward, and getting better.

Mind you, more than half the reason the last two books of mine got written was not only my subconscious chewing over dealing with the ways damaged people making the world, and themselves, and each other better, but also because 2021 has been very rough on my friends. Okay, I kicked the year off by catching LungPaoSicken for a second time, but at least I didn't have the PCS from Hell (Long story, not mine to tell), or another friend who was trying to accomplish all her duties while recovering from WuFlu with her husband in a medical coma from complications of same. (She has a really good command, thankfully, who takes care of their own.) That's not even counting civilian-side the nurses, EMTs, pediatric docs, and emergency dispatchers whom I love dearly, whose last two years have been... yeah.

And Cedar? Well, this was the year of "You're a civilian chemist, so you haven't hit this before. Welcome to what's essentially a deployment, when you have to hold it together for months on end and you don't know when he'll be back with you. I understand what you're going through, though the terms I use include acronyms you may not know." (She's quite fond of SNAFU, FUBAR, BOHICA, and FIDO now... In fact, 2021 may personally go down as the year that I taught Sarah Hoyt, the least military person on the right you'll meet, to know and love FIDO.)

So I've been writing things full of hope, and designed to make them laugh, or at least forget about their cares for a little while. (Yes, writing about the proper use of a sap in close-quarters combat was not only plot-appropriate, it got a certain twitchy gent to get this grin... "You paid attention!") But I can only write so fast. Of course I opined that more people, other people, should write more stories, and hopeful ones!

I didn't mean for Cedar to commit anthology! I felt even worse that after she took our conversation and explicitly set out to get more people writing realistic stories of PTSD, and the anthology call explicitly demanded they be stories of hope... I had nothing to contribute.

I tried. It refused the idea of short, and is working on becoming yet another novel. One of the hardest ones I've tried to write, especially because the running theme is about how much home changes while you're away, and how much it's not just them, it's you, when you've been Out doing Things. It's going to get finished, no matter how hard it gets, even if only because I have two retired mustangs and an active senior NCO giving me that look, about when am I going to give them another chapter. I may be a civilian, damnit, but I am not immune to the look. Even transmitted over text at distance.

...I can't go back home. It hasn't been home in years, and, well, many of the places, and some of the people, they're only alive now in my head. My home is people, and wherever Calmer Half is, that's my home now. But the land is still in my blood and bones, and I miss it.

And that left me having instigated an anthology without actually contributing. Worse, Cedar understood. I think I'd have felt better if she'd thrown something at my head. (Okay, she did also politely, pointedly "not-demand" I finish the novel. Encouragement, that's what we'll call it.) Jim Curtis (OldNFO) understood. And wrote something for the anthology, and tossed it at me to beta read. LawDog understood, and wrote a story of his own for it.

The last surprised me. But LawDog often does. He's quiet and sneaky and caring like that.

But Cedar felt I'd already said what I needed to, and it was hopeful, and if it wasn't a fictional story, it was a catalyst to getting other stories out there. In the resources at the back of the anthology, she excerpted part of the blog post wherein Calmer Half maneuvered me into reviewing Arsenal of Hope, and All Secure, and talking about PTSD and our marriage, in the first place.

So if you came here looking for the rest of the story, here's the link to the story that's not in the anthology, because it's not fiction: On Post Traumatic Stress, marriages, and two truly awesome books

And if you're looking for the anthology, it's here: You Can't Go Home Again