It's July in Southcentral Alaska, and that means weeks of gray overcast clinging to the mountains and creating a lower cap on the sky, a ceiling of 1000 to 1500 feet up, ragged undersides that spill down in light curtains of rain, seeming gauzy curtains up in the mountain passes hiding the way through, splattering down too heavily to be ignored, but too lightly to be a soaking rain. It's the time of year where it's normal to park your car and come out two hours later to a wet parking lot, still dry beneath the shadow of the vehicle, and never noticed it rain - but turn on lights and wipers on the way home. Student pilots circle the runways, waiting for the ceiling to rise enough for touch and gos, looking longingly at the weather charts in hopes of making cross-countries, while their CFIs look at the same charts with a more experienced worry of fuel and sustained higher ceilings to make it back, even if detouring around downdrafts and virga.

It's the sort of season that makes a student pilot learn why the older pilots state so firmly that you must never go through a pass unless you're willing to wait for when it clears up - and that if you want to learn to scud run, you better do it on a clear sunny day first, because the world looks completely different at 700 feet instead of 4000, and you can get lost in a hurry that way.

The fireweed is blooming at the top of the stalk, and the wind off the mountains smells of snow, bringing a chill in the rain-soaked humid air that aches the damaged joints and bones. This weekend is the last one for dipnetting and catching salmon to fill the winter freezer - the days of abundance are drawing to a close. The scent of snow haunted me all the way to Willow, with the first speckles of golden leaves in the aspens, as I went with my fittings to get an eighth of an inch planed off, cutting the weight of the spars and the height as I brought them to the lower limit of acceptable width, to where they'll fit the original fittings.

Casting my mind back to April, when there was still snow on the ground here, I remember a warmth that baked the bones, that fell without reserve with abundant sunshine across a broad flat land - driving with lights on at four in the afternoon, I remember San Antonio. There was humidity aplenty, there, too, but it was more a stifling blanket against the skin instead of a creeping tide of pain - and could be banished with a blast of the prop, the wind coming through the cockpit of an L5 as we leapt into the sun-baked sky. Whereas here the horizon is now bounded by the curtains of low clouds and rain draped onto the mountains dimly seem in glimpses through them, there the humidity seemed to erase the sky, the horizon, and everything in the distance - a world so endlessly flat made small by lack of definitions in the distance. I could barely see the downtown skyscrapers from Cannon Field. 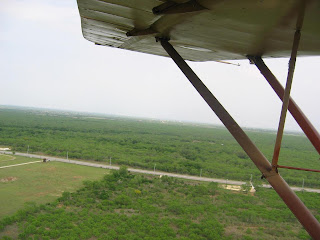 Looking back now, the near-impossible heat that had me hovering on the edge of heatstroke doesn't seem so bad - but as wiser people warned, that was April. Still, as rose-colored glasses are want to do, I miss Texas. (But not Houston, with its smog.) I miss warmth, and light - and though I know the crisp, clear days of September are ahead with the full blaze of aspen and birch in bright and browned golds, the purple-red of highbush cranberries and dying fireweed below and the bright clear white of fresh snow on the mountains gleaming in sunlight as it comes closer and closer to the sea, for now it's soggy, gloomy, damp, and making me contemplate the wisdom of birds who migrate south. 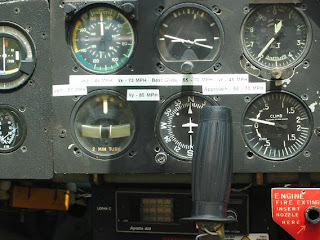