Nothing but the good things 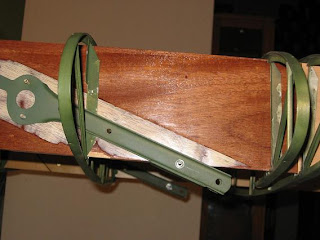 The spars for a F-19 Taylorcraft are 1/16th of an inch taller than the spars for a BL12-65 or BC12D. Fortunately, I found this out when puzzling with my IA on why my spar attach brackets didn't fit right, instead of when I had a finished wing not fitting on the airplane!

Called Eyak Air, and Joe said I could fix that with a jack plane, or he could do it in five minutes, no problem, if I brought the spars up - even on a Saturday, when three-quarters of Alaska is gone fishing. Road trip again!

On other notes, the FAA, in a rare moment of common sense intended to help keep vintage aircraft safely maintained, restored and flying, released Advisory Circular 23-27,Parts and Materials Substitution for Vintage Aircraft, dated May 18, 2009. The AC, created by the FAA’s Small Airplane Directorate in Kansas City, Missouri, was a joint effort by the FAA in consultation with industry representatives including EAA and EAA’s Vintage Aircraft Association. EAA Press Release here.

Why is parts substitution so important? Well, when your airplane outlasts the company that produced it, finding "approved parts" created by and for it becomes not only hard, but dangerous. Theoretically, I should only replace parts in my airplane, according to the FAA prior to the AC, with the exact same parts that broke. Do you have any idea where to still find silk-wrapped solid copper wiring? Can you imagine being fool enough to put that fire hazard in a wood-winged aircraft when today's modern wiring will work better, cleaner, cooler, cheaper, with far less chance of fire if something goes wrong? Hell, back when this plane was built, the anti-drag wires were the same wire as Harley Davidson spokes, and the carburetor was a tractor engine carb, slightly modified to take sudden (for a tractor) altitude changes! They didn't have the concept of airplane-specific parts!