So, first I checked the fridge, then the pantry, and started a pot of egg noodles. Then, to the backyard - not to the recently planted garden, but to a patch of chickweed which is growing far better than the struggling greenhouse seedlings. 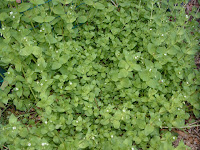 Gathering a few handfuls (maybe 3 cups?), I rinsed it off, pulled out the few blades of grass that came with, and chopped it up fine like parsley. I tossed some sliced chunks of chicken leftovers (1 cup?) into a pan with a little olive oil (1 Tbsp?), and once they were warm, added the chopped chickweed with a healthy dose of key lime juice (1 Tbsp?), some salt (1/4 tsp?), and a few grinds of black pepper (1/4 tsp?), then put the lid on for it to steam as much as saute.

The egg noodles were done soon after, so I drained them and dumped them in a bowl, then added the topping, and stirred the chicken chunks and bright green veggies into the noodles. While it wasn't the most photogenic dish in the world and lacked a chef's plating, it was hot, filling, and full of bright-tasting peppery greens, far more vivacious than mere parsley. Brigid could have made it look beautiful and typed a proper recipe; I chowed down instead of trying.

Note for people watching their carbs or glycemic index - increase your greens and chicken to your pasta ratio, and switch to whole wheat pasta. In fact, if I plan ahead next time I want to switch to whole wheat pasta myself and maybe turkey, because the regular pasta and unspiced chicken is a little too mellow to properly anchor the bright combination of key lime juice and chickweed. Have fun with your food!

Photo from http://www.veggiegardeningtips.com/edible-chickweed/ which has a nice overview of the plant, and other edibles from the unmown backyard.
Posted by On a Wing and a Whim at 3:52 AM