Pre-war Taylorcraft aileron cove looks kinda like swiss cheese. In order to get the fabric covering of the aircraft to stay on the metal, lots of holes were drilled in the aileron cove, and a peice of fabric was laid on the inside (back of the peice) and doped. When the fabric was wrapped over the aileron well while covering the wing, the dope on the surface fabric would bond to the fabric strip on the inside, and despite the extreme concave surface, the fabric would not snap away from the metal.

I wanted to avoid making all these holes, and to use the post-war solution of screwing a small thin strip of metal down the length of the cove in the middle of the curve, then laying a fabric patch over it. However, when I got the aileron cove fitted and attached, I discovered a small problem: insufficient clearance. There is very little space between the aileron cove and aileron - in fact, it will be about an eighth of an inch when the fabric, dope, and color coat have been put on. This is definitely on plane that doesn't need gap seals.

It does, however, need the fabric on the back of the cove. I am not going to try to move the aileron himges and control surfaces out; I'm just going to put the battery back on the charger after depleting it making holes with the step drill. At least it's starting to look like an airplane! (The yellow on top of the wing is the aileron - I got tired of carting it across the shop and back every time I wanted to check clearance.) 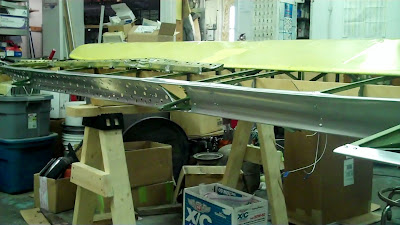