The wings are out to be painted, so more working on the fuselage.

Remember the last stringer repair? Further inspection found that the stringer below it was split, as well. Had been split a long time - there was near-petrified electrical tape holding the wood together. 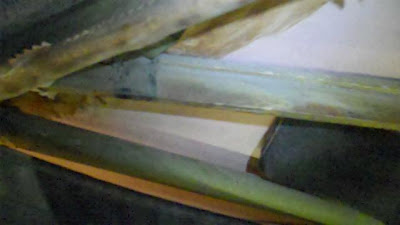 While not a critical to airworthiness repair, it needed repair, and I wasn't going to let it pass me by. Replacing the stringer would involve cutting into the fuselage, and having to recover the whole plane - so a temporary sandwich repair it is. 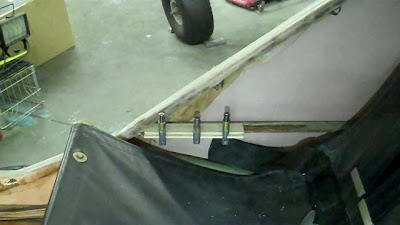 Then on to putting on the bungee cover - first, to shortening the center screws so they neither penetrate the fabric, nor stand the cover off the plane. You can grind screws down easily enough, but getting ground-short screws through the thick material would be a problem. Obvious solution: insert the screws, then grind them down. I almost kept the paint job intact, too. 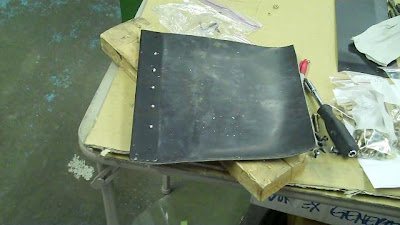 My IA started inspecting the landing gear and tail, and revealed most everything airworthy, but in dire need of more lubrication. While looking at the gear legs, he noticed a few bumps that were not part of the smooth structure, but didn't quite look like the massive corrosion bubbling the paint they appeared to be. Can you see what's odd about this picture? 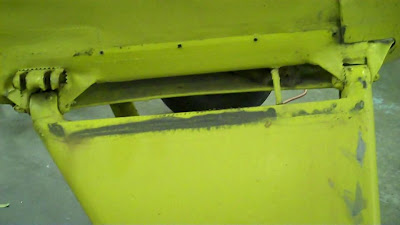 Look near the top of each tube of the gear leg. Underneath the paint and primer, undisturbed for years, were two small screws in #40 holes right above reach bolt that needs to be lubricated. Instead of putting high-wicking oil where we could reach and hoping it would get inside, there were actual lubrication ports, kept clean and clear by little screws - very old screws, by the common-head style. So I chipped the paint off, unscrewed them, put LPS3 inside, and screwed them back down. Those will definitely be used from now on! 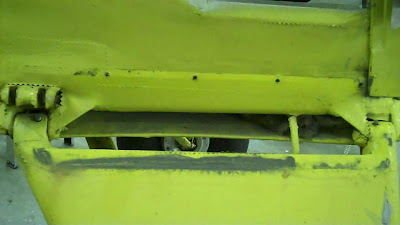 The fabric near the gear legs had some wrinkles that were then carefully ironed out - when patching a plane, if you do not carefully patch so that the new fabric draws the old fabric tight, you'll never get the old fabric to lay quite right without ironing it again. It's a purely cosmetic thing, but I want her to look pretty, so I did it. Then, for reduced drag and increased beauty, I put the fairings back on over the freshly lubricated bolts on each leg. They'll stay there until next annual - this part of the plane is done! 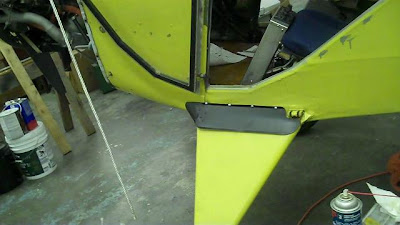