Two months later, the anthology is out!

I don't post very often, so it was only two posts ago I was talking about being ambushed by friends and coming up with a story for an anthology. Well, it's now out! 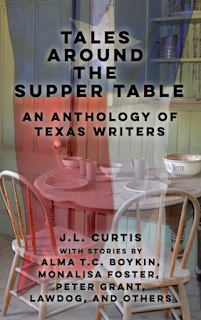 Tales Around the Supper Table: -An Anthology of Texas Writers-

Alma has a dragon working on Alchemy, Peter has a prequel on how Tyler Reese came to partner in the old west with Walt Ames, before the start of the series.

I have a trader trying to build up a lost colony by shipping spices - described around the writing table as "The challenge of doing business in space Afghanistan."

By the way, if you want to do business with some crazy, determined people who are trying this very thing in modern-day Afghanistan?

Rumi Spice is sourcing saffron, black cumin, fennel, and other spices out of Afghanistan - bringing fresh, high-quality spice to the USA and funneling the profits, with as few middlemen as possible, straight back into the people there, trying to build a living for them and that doesn't involve opium or endless wars, and invest in the local infrastructure.

One minor word of warning: the cumin is so fresh and strong that I have to halve it for most recipes, as they assume you're getting ground cumin what might have sat going stale on a supermarket or spice cupboard shelf for over a year.