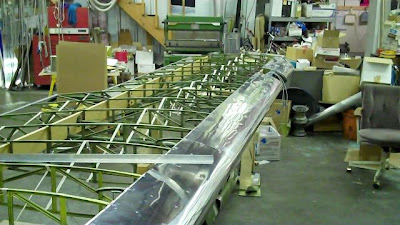 The wingtip is composed of six separate pieces of metal, filed and shaped together to fit. Originally, there were five pieces, but when my IA made the decision to extend the leading edge to the top of the spar all down the length, I had already made the wingtip pieces to match the original, and fabricated a patch to cover the gap.

The patch only covers two rib bays because one rib was placed a quarter-inch outboard from the old spar; I didn't catch this until after it was nailed in place on the front and rear. Thus, the one-bay-wide panel that covers the decreased width and increased angle from the standard leading edge toward the wingtip was made full-length on the second time 'round. Yes, this means none of the other pieces fit as meant either, and had to be hand-trimmed, shaped and filed to fit. 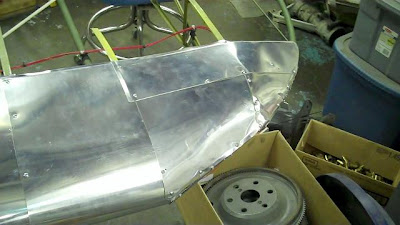 View from the underside of the last two pieces outboard. 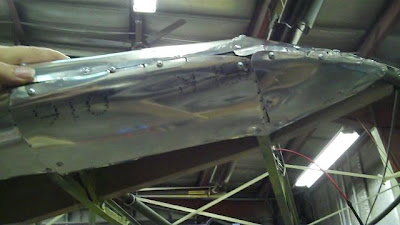 This has been one of the most aggravating parts so far - I expected it to take two days, and it took almost two weeks. Also, I am a rank beginner when it comes to sheetmetal - I can't help but compare my work to the gleaming polished sides of a T-6 on the field, and feel frustrated. Fortunately, it'll all be hidden under tape and cloth, and if I did not show my shame here, you would never know it.
Posted by On a Wing and a Whim at 1:59 PM