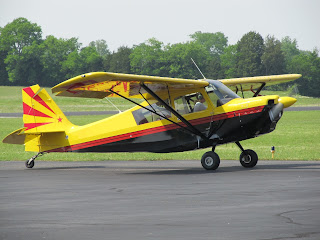 My CFI delights in seeking out the roughest, hottest air with the most gusts and crosswind that I can just barely handle. The downside is that I don't feel I'm getting much better - the upside is that I actually am, because he's upping the conditions I must tackle with every flight. On the whole, I really like this approach, because I'd rather tackle these conditions in training than meet them for the first time on my own.

So, today was the midafternoon puffy-cloud thermal-rich lightly gusty afternoon heat day. I'm used to flying off an airport - Birchwood - where only a gun range separates it from an arm of the sea. Even the airport I'm at now, for all its distance from the ocean, is only 590 feet above the sea. However, let me introduce you to Mr. Heat and Mr. Humidity's third drinking buddy and partner in crime - Mr. Density Altitude. When the gang gets together, for a temperature of 91 degrees, a heat index of 105, and a density altitude of 2600 feet...

I drank a full bottle of water before the flight, and the amber overpressure light never lit. We left the window open to keep from being steamed alive in the cockpit, and the 80 knot wind in the pattern kept us feeling dry and almost comfortable until the instant we landed and the wind stopped. The airplane, underpowered to begin with, acted like she was overloaded and had failed to round up most of her engine's horses for power. Even when coming in to land, pulling power back as normal to the usual airspeed meant that she dropped like a stone, unable to sustain the usual lift in the thin, hot air.

After a handful of trips around the pattern, I ran another assessment of my status, and licked dry lips with a barely-moist tongue. "I think I only have one more landing left in me." The instructor agreed - but by the downwind leg I realized my mistake. The mental and physical fatigue from heat and dehydration does not increase at a linear rate - rather, it's the upswing of a quadratic equation. By final, I was fighting myself more than I was fighting the plane. I'm not proud of my last landing - it was great until I was one foot off the ground. Then, I reacted too slow, too late, to a wind gust, and ended up putting precisely the wrong control input in at the wrong time. The bounce, lo, it was mighty - fortunately, a last hit of adrenaline sped my reactions and I wrestled myself and the airplane safely back down to the runway.

When I walked into the FBO, Calmer Half took one look at me, another at my CFI, and like a blessing from heaven, pressed a cold can of soda upon each of us. After the first half of the can, I could think again - but I was not safe to drive home. We wearily debriefed, and scheduled for midafternoon tomorrow. Next up - wheel landings in this weather.

When I get to the Rockies, this I vow: morning and evening flights or not at all. Density altitude is bad enough starting close to sea level, and while my plane has more horsepower to weight than the Citabria, I have no desire to cook myself to insensibility while operating with less margin.
Posted by On a Wing and a Whim at 11:18 PM