I had hoped and planned to go to a fly-in last weekend, but the test pilot's schedule filled up, the plane needed to go down for maintenance to tweak her rigging, and I didn't have enough time to feel comfortable and safe solo. So with heavy heart, I sent word that I wouldn't make it.

Then I found the new CFI, who had Sunday afternoon not only free, but free in a "my wife wants me out from underfoot" way that held no time constraints. So, he showed up as I was fueling the plane, and we went over the pre-arranged plan, the route, and the weight and balance with me. Off we went into the wild blue yonder...

It was great fun, with reindeer and moose sausages, potato chips, soda, and one awesome woman brought cookies and cupcakes. We even had the madatory kid and/or dog underfoot, in this case an eldery Chow who was pretty laid-back about the whole thing.

While the main goal of the flour bombing competition was to hit the tarp laid out on the gravel at the center of the run-up area before the runway proper, while the group gathered by a runway threshold panel with a drink cooler, the main rules we agreed on were
1.) Hit the surface of the earth.
2.) Don't hit the dog.
3.) Maintain at or above 150 AGL while dropping the flour bomb.

Note: this one was NOT mine. 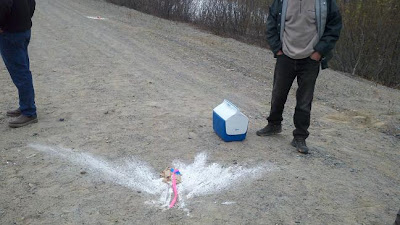 We didn't win, (there are some guys who are really good at dropping things where they want it), and if my takeoff could have inspired a good round of ribbing for putting in more aileron than needed for the calm wind below the treeline, well, the good folks were kind enough to give me a pass. The long flight home was faster than we'd planned, as we picked up a tailwind, and we were having too much fun to be bored. A few rain showers impeded visibility - it may only have been 80 miles. 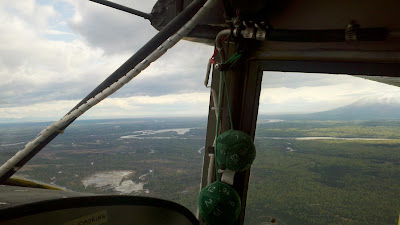 The airplane's down for a few days with paperwork, and mechanical problems - tweaking rigging, checking a rocker box cover that decided to leak oil, patching a few spots on the tailfeathers that may be old damage, or may be fresh damage from the gravel runways, converting temporary placards to permanent, and so on. It's been a good shake down. 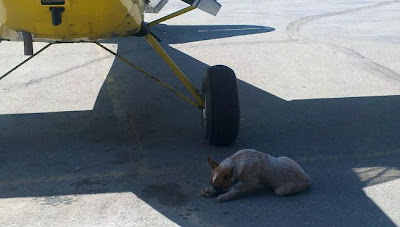