There were very good notes yesterday: the round die turns out to be 13/16, not 3/4". (Never mind the packaging, mind the calipers.) This means that the manufacturer does actually make a die stock for it - and though there's none in town, the internet is a wonderful thing. Grizzly tool has one on the way.

Image Plastics turned out to have moved, so it took some hunting to find them - but once I did, it was more than worth it. The owner recognized the microVGs on the landing light lens with an enthusiastic "Hey! I've read about these!" and from there it was good times to purchase both plexiglass and lexan and very detailed instruction on how to form each into a lens given a hairdryer, a home oven, some masonite, a little wood, and "gloves just like these but brand new, and keep 'em in a ziplock bag when you're not using them." Although I had only intended to purchase one one-time replacement, he made a very persuasive argument - why sink all the time and trouble for a relatively inexpensive piece of plastic each time when I can do two to four for almost no more cost, and avoid having to do it again for years? 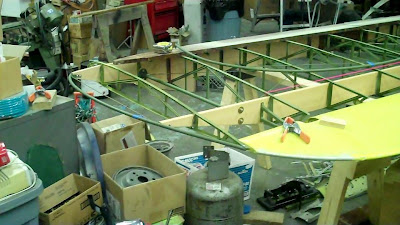 Then to work, and to wrestling with the tip bow and tip rib. Here was file to fit at its finest (or most frustrating.) A couple careful die grinder cuts, an lot of filing, and many times of putting both on, clamping the tip bow down, and muttering later, the tip bow is screwed into the tip rib at the trailing edge, the tip noserib at the leading edge, and bolted into holes fresh-drilled in the front and rear spar. Today, after being absolutely sure the rib is straight and square, I'll nail it and declare it done. It wasn't as straightforward as it sounds - this included a trip out to Lake Hood to drive around and look at the two Taylorcraft that are close cousins to this one to see exactly at what height and angle relative to the spars their tip bows were set. 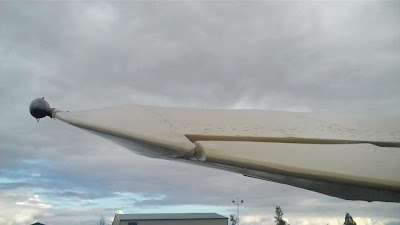 Then, I stopped for dinner at Taproot Cafe on the way back, and relaxed a little while under the influence of a bluegrass jam session, french onion soup, greek salad, and two donuts with a chocolate raspberry sauce poured on top. On days like this, a girl needs chocolate - and the bluegrass was great. Service was excellent, and with the spacious new kitchen, the food didn't take more than one song to appear. (Okay, two songs for the donuts, but I hadn't even finished my soup before they appeared!) 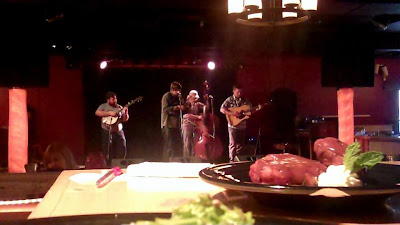