Courtesy of EAA Chapter 673's now-online archive of historical pictures from their airport, I found this old photograph of a Taylorcraft. I like it - it'll let me paint my wings yellow to match the fuselage now, and still work with a new design when I redo the fuselage in a few years (It's not dead yet, but I expect the Lower 48 weather and sun to make it ready to go in three to five years.) 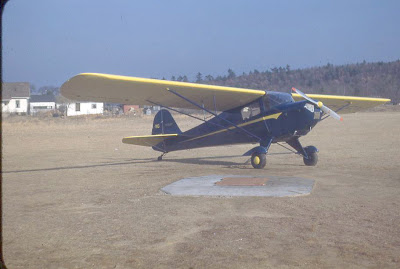 Things the IA's inspection caught: Because the surface of the fabric balloons slightly in flight, other than where it's glued down or rib-stitched to the shape of the airfoil on the ribs, it can flutter and flex to rub against structures that are not currently touching the surface. Also, in preparing tis fabric to last thirty to forty years, I need to account for the polyester fabric sagging over time and becoming able to chafe against these structures in a few decades. 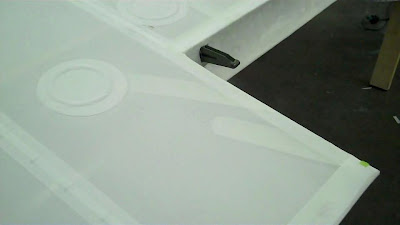 If you don't put tapes at every edge and surface, there's only one thin flexible surface to chafe at and get chewed away by the structure beneath. See the sharp break on this Citabria's top of the leading edge - they'll get a crack along that untaped ridge long before the rest of the fabric starts to go bad. 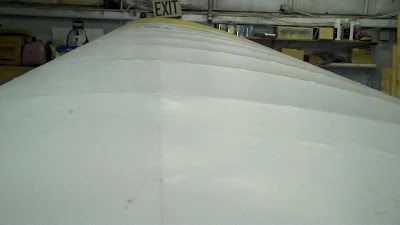 Unfortunately, the ceconite process calls for thicker dope application than the Stits process I learned, so some of my inspection rings and tapes didn't have enough dope. I had to wipe some not up to spec with MEK, pull them up (a tongue depressor with one end shaved was the perfect spatula), and dope them down again. 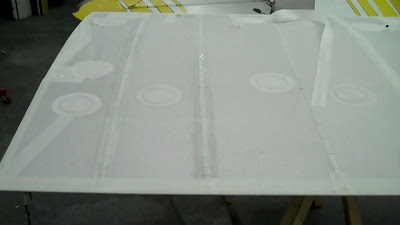 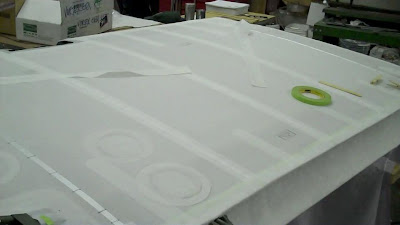 Last, and with great relief, we snapped chalk lines for the leading edge seam and the line two inches above to define the edge of the tape. Then, with quite a lot of hurry, since it's a 6 inch wide piece of cloth and the dope dries quickly, we put the leading edge tape on. The four-inch overlap went on the bottom of the seam to cover the mess of seams and tapes at the wingtip, making top and bottom beautiful and functional. 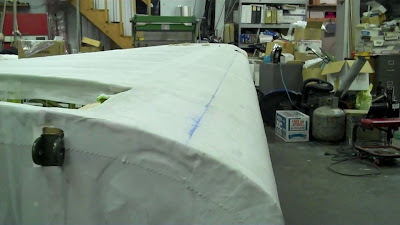 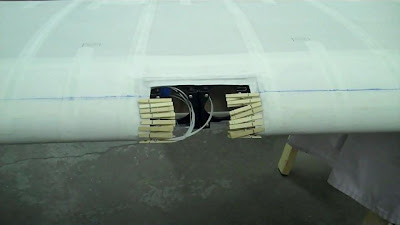 The only shot I took of the full finished wing: 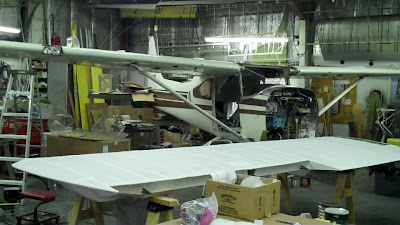 Next up: pulling down the right wing and finishing it - if the shop with the paint booth doesn't have an opening soon, I just might have two wings ready to go at once! 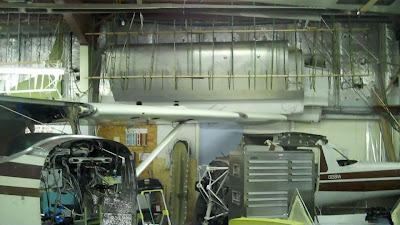 Is anyone surprised that I woke up from dreams last night at three am, saying "I need to put more inspection rings on!"? Yeah, me neither, but I am amused.
Posted by On a Wing and a Whim at 1:29 AM