Theraflu nighttime is supposed to help you sleep. It's not - I'm actually feeling more awake. Must check that I didn't pick up the wrong packet. Anyway, as long as I have time on my hands (I'd call my Calmer Half, but he's sensibly asleep, and my voice keeps going away), here's what I've been up to in the past week - working on the right wing.

This is the wing right after we puled it down from the ceiling storage, for the starting point. 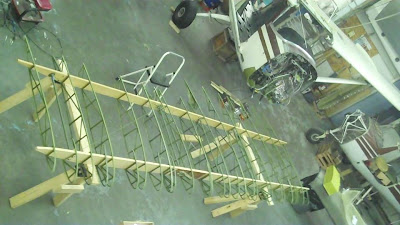 First, knowing what I now know, I went over every piece of hardware on the wing. I double-checked all bolts with three or more threads past the nut, as that is an indicator that it's likely too long, and may only seem tight because the nut is cranked down on the shaft. The easy way to check - move the head with a wrench. If the whole bolt spins freely in the hole, nut and all, it's too long. Replace with a smaller bolt. 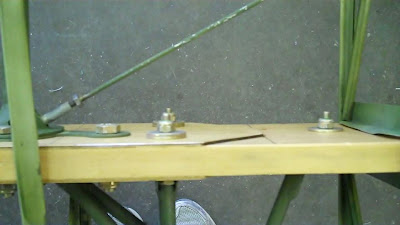 By comparison, these are correct thread (and shank) length. 43.13 states that there must be at least one thread showing. Do not skimp on that - if you are having trouble getting a full thread without crushing the wood, go up a size. 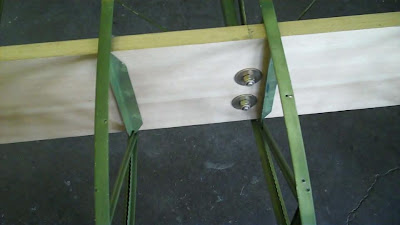 Hauled the old spars out to check where the ribs actually were on the old wing vs. where the marks are, as the marks were different on the front and back sides of the spars. All ribs, even the ones under hardware (or that should be under hardware and weren't), were moved to precisely where they were on the old spar. This will turn out to only be a rough guess after you square the wing when trammeling, but it's faster and easier to move the ones under hardware and get it as near-right as possible while it's still easy than make gross adjustments later. 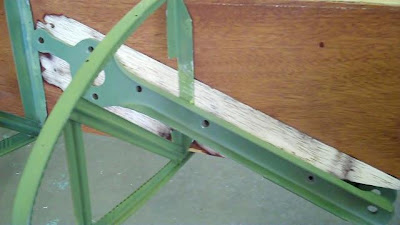 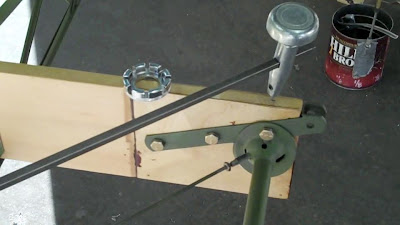 Trammeling requires more than just making each bay square; if you pull too much on one bay or not enough on another, you can actually force the spar to bend in and out. So I clamped two paint sticks to the outer edge of each end of the spars, and ran a string to check for spar alignment. Some adjusting was required - and yes, this means you have to go back and recheck your bay lengths, too, once you have your spar straight. If you swapped the compression struts and didn't get the right length in the right station on the wing, you will not be able to get the spar straight. 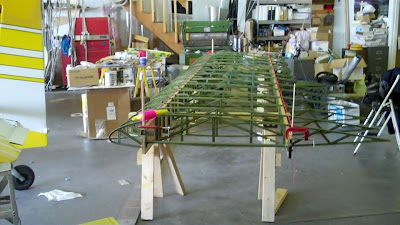 This string setup, by contrast, is to check the height of the ribs and make them uniform. It's attached to the second main rib (Since my butt rib is not yet on) out to the second to last main rib (as the tip noserib & tip rib are both smaller and lower than the rest). Make sure you do not tie this with knots on top of the ribs, or it will not be properly aligned. 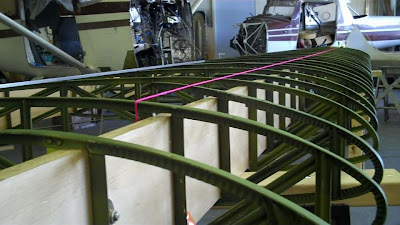 Ribs cannot be blindly adjusted to string height; some ribs themselves are over height, and lift the string up like the second rib visible here (a noserib). These must be corrected before lifting the ribs nearby to string height, or you get a rippling effect on the leading edge. 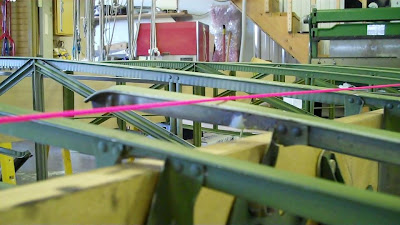 Next, nailing the ribs. I got this done over two days before I had to take two days off for sickness. Steps after this should have progressed faster, but I am still too sick to work full days - or to work as fast as I could when healthy. My wonderful hosts are still fighting the lingering dregs, two weeks after they first showed symptoms, so I'm gritting my teeth and trying to balance rest against impatience and time constraints. 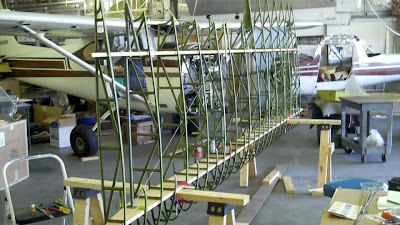 After the ribs were nailed, I installed the aileron in order to make sure that there was enough clearance in all dimensions between aileron and ribs. Unfortunately, the line marking where the tip rib should go left negative clearance - this is why we check! 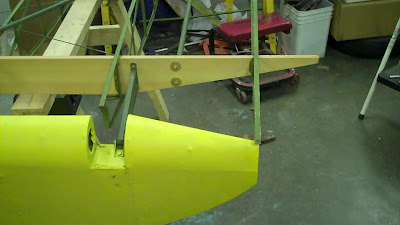 So, carefully prying up the nails, the rib is moved outboard until it fits with adequate clearance even after the thicknesses of fabric, dope, and paint will be applied. 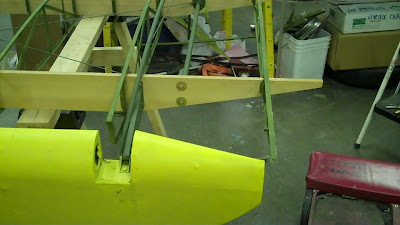 Butt rib installed. Trailing edge filed and cut to fit. Note: you only see two steel channel braces (one to the butt rib and one to the corner) because I had all six for the wing together earlier today... and now I can only find five. So I installed all five, and if I can't find the sixth tomorrow, I'll fabricate a new one Monday. 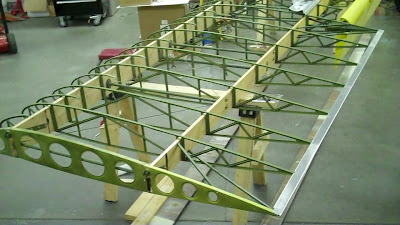 Now to try to get some sleep, and see if I have a voice tomorrow. If not, I may make it a very light day and bundle up with a book, in order to try to kick this sickness. My darling Calmer Half is coming up in two weeks - I want to be both healthy and flying by then!
Posted by On a Wing and a Whim at 2:45 AM