Or, And This Was Just Monday. 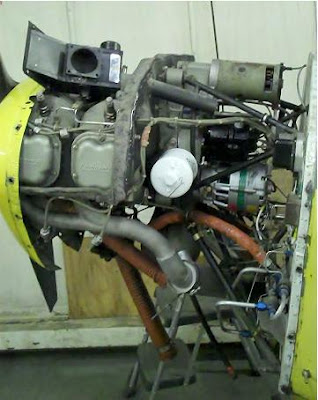 The wings are waiting for a paint shop slot to open. So, I tackled the airbox - here we see it lying on top of the engine, back from having two bad welds redone by Atlee Dodge. (They are Good People, and good at fixing parts!) The exhaust, also back from Atlee Dodge after being checked for leaks and rewelded, has already been installed.

Here's one of those grand times it pays to either have a friend, or wonder why designers think airplane mechanics have six arms, each six feet long with three elbows and five-jointed fingers including two opposable thumbs. Despite having the strength of titans and being impervious to pain, the impermeable, uncuttable appendages are also supposed to be maximum 1.5 inches in diameter. Just you try holding up an airbox while holding a screw in place while threading a washer and locknut on the other end, and tightening them. For example, see the clearance for putting on the nuts. 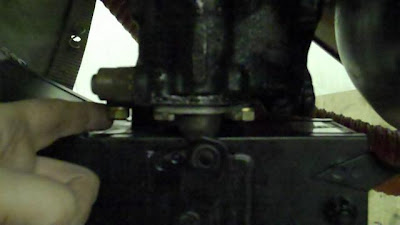 After I got everything on, my IA came in. I reported what I had done, and briefly puzzled over the odd gouges on some of the old nuts in a circular pattern. My IA eyed the airbox, and informed me that was because the last person to replace the hardware had done it incorrectly; instead of one thick washer, I needed a thin washer and a star washer to lock everything in place. Time to redo everything! This time, I only changed one bolt at a time, so I didn't have to hold the airbox in place. 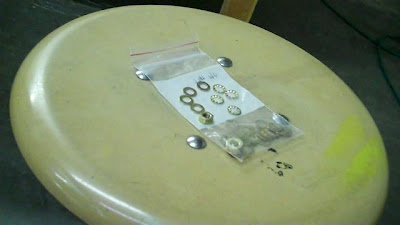 The next step was to re-attach the Aeroduct, or high-temp resistant ducting to the airbox. (It's also called SCAT tubing, and the extreme-temp stuff is SCEET tubing. I don't know what it stands for, and don't click any non-obviously-aviation links if you don't have brain bleach handy. Just search for Aeroduct on Univair or SCAT on Aircraft Spuce, and marvel that there's not a wikipedia page on it yet.)

These are all the burnt-orange slinky-looking hoses you see in airplane engines. While air is normally rammed into the airbox through the filter up front, if that plugs enough to not draw sufficient air (waterlogged from flying through heavy rain, iced, clogged with dirt, dust, cottonweed fluff, corpses of a thousand thousand mosquitoes and black flies), we need another source of air to feed the engine. If the outside air is humid enough that it causes/risks causing carburetor icing, we need the secondary air source to be hot enough to melt (or prevent) carburetor icing. Therefore, air is drawn from a little higher up the cowl, through a length of aeroduct, and run down the length of an exhaust shroud to heat, and fed back through more aeroduct to the airbox. Pull the carb heat lever in the cockpit, and a wire directly attached to the handle will move a lever from filtered air to heated air.

(Side note: As one exhaust shroud, pulling half the engine's output, is dedicated to carb heat, this leaves only half the engine's output, off one lone exhaust shroud, to provide cabin heat. This is part of why the Taylorcraft is famous for having so much cabin heat it can just barely warm your right big toe. On the bright side, it isn't known for being prone to insufficient carb heat. Yeah, I'm not looking forward to that aspect of flying her in winter.)

The first hose I pulled looked like this - note the the shiny wire coils on the section near the rim of the trashcan are internal. 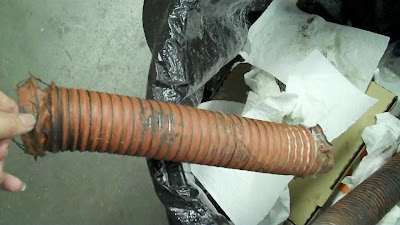 Well, one hose replacement led to another. And when the two that obviously needed repairs were finished (My carb heat should be Much More Effective now), I asked my IA what he thought of re-attaching the rest. He looked at them carefully, then looked me in the eye and said, "They are airworthy. If you're fine with your work looking trashed and shoddy, you can reinstall them."

There are definitions of airworthy and unairworthy conditions, and then there's learning to make judgment calls. So, after replacing all the scat tubing, a poor picture of a beautiful engine looks like this: 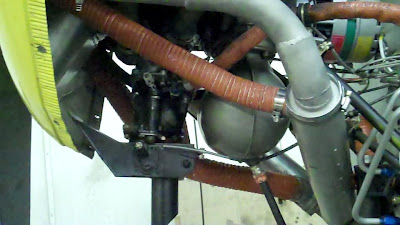 This is the hardware leftover in the bag after the airbox was on the engine. Not to worry; I still had a filter to buy, and a grate to install; I knew this hardware would somehow fit with that project for tomorrow. 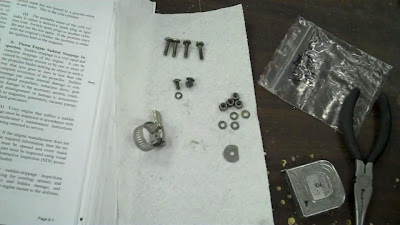 Ladies and Gentlemen, meet my gascolator. I thought this was going to be my biggest problem, and took quite a few pictures to document the safety-wiring so I could re-create it once I figured out how to get the thing apart and cleaned. The gascolator is the lowest point on a gravity-fed fuel system, and therefore is the perfect point to put a filter to catch water (heavier than and non-miscible with avgas) and any debris (cottonweed fluff, glacial silt, corrosion, etc.) that might get into the fuel system. (Well, normally the lowest. There's this bypass to a boost pump that is lower, with its own filter and drain to check. The boost pump is a long story.) 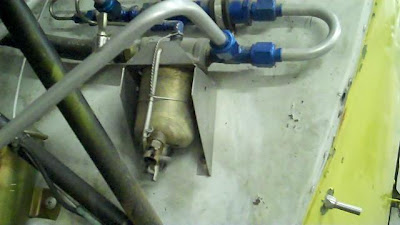 In order to work on the gascolator and boost pump, the first step is to shut off the fuel and drain the lines. So, I leaned in the cockpit, reached over, and flipped aside the tab that keeps pilot or passenger from accidentally pulling the fuel shutoff control. 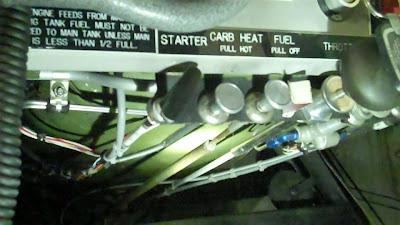 Then, I pulled on the knob - or rather, I strained and grunted, and strained, and the knob went nowhere. This is a Bad Thing - the ability to shut off the fuel flow in a hurry is not only darned convenient when working on a plane, it's critical to killing an engine fire, or avoiding a post-crash fire. This means the ability to quickly and easily pull that knob or the three individual levers are critical action items on the Avoid Burning To Death checklist.

I called my IA over, wondering if I was missing something really obvious. He looked at me, flipped the retaining tab out of the way, and pulled on the knob. It didn't move. "Turn the shutoff valves." I went under the dash and pulled on a wing-like handle to shut off the fuel coming from the wing tank on my side. See blurry out-of-focus knob in the next picture: 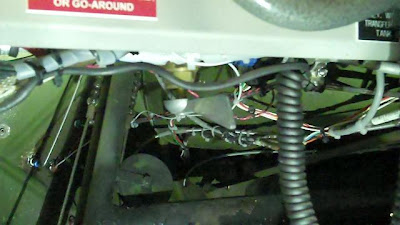 "Um, I can't move it. You have more strength - can you try?"
With gentle and Extremely Firm Tone, my I.[inspection]A.[authorization] pronounced his judgment upon the airplane. "You are the pilot. If you can't shut off your own fuel, that is an unairworthy condition, and must be fixed. Immediately."

Righto. That wasn't just me missing something, then. Time to drain the tank, then take these stiff and stubborn assemblies apart! 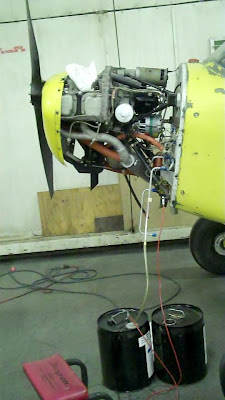 Not that they cooperated any more in coming apart than they did in turning, but that's why we have big adjustable wrenches, fuel & oil absorbent pads, flashlights, and Words My Father Doesn't Approve A Christian Young Lady Saying.

Side note: The green you see under the various controls is my main tank - 12 gallons of Avgas. The fuel shutoff control goes back on a long rod to a lever on the shutoff valve between the tank and the fuel hose through the firewall to the engine. Each wing tank shutoff valve lets fuel powered by gravity drop into this tank. This is why I can't simply slap the radio and transponder under the panel - there is nothing structural to attach to, and I'm in no hurry to try welding or drilling anything to a gas tank, or slap-dashedly try to reroute gas lines where the shutoff valve might not be so easily in reach.

With much wrestling, the valve cores were removed. Trick to remember later - one wrench on the valve body, one on the valve stem nut, squeeze together. This provides much more leverage than lying on your belly with arm outstretched, trying to muscle the valve. It also stabilizes the darned thing so it doesn't flex against the thin walls of, say, the main gas tank, for the main shutoff valve. Wish I'd known that trick years ago - it's under the "work smarter, not harder" files now!

Here are the guts of the valves. Note the insides are not a shiny brass color, except where gouged. Okay, maybe don't note the gouges as it's out of focus. By this point, I was woozy from gas fumes inside a cockpit - even with both doors tied open, it's still a small space. Time to declare victory, go home, and clean them on Tuesday. 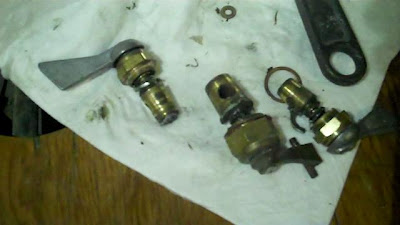