In Bozeman now, doing laundry, resting up, loading pictures to Blogger and catching up. These pictures were a little out of order when I posted them, so the post is edited for the actual order now that I've had rest and coffee.

Setting out, I was more interested in dealing with the airplane than taking pictures, so there are none until Sheep Mountain. 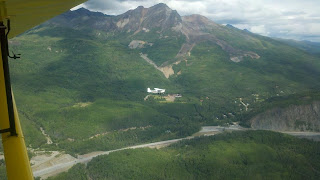 The Gunny (and J of Call to Wings) flew escort to the border. The Gunny's plane is so much faster, he flew racetracks around me in order to fly with me. 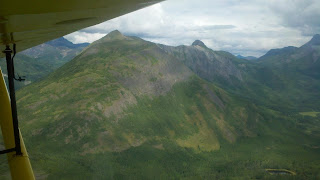 Mentasta Pass. Wasn't fast enough on the camera to catch the two eagles circling in a thermal, and then I found the turbulence, so I was busy with yoke, throttle, mixture, and carb heat. 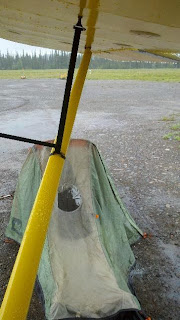 Weather was good until Mentasta Pass, and then it lowered again after Northway into Beaver Creek. I camped under-wing and stayed dry, but the ground was hard enough (and then loose enough when soaked) that the tent stakes slowly collapsed. Let's not even go into all the places one can be bitten by mosquitoes.

Burwash Landing was pretty, but I was more interested in refueling than taking pictures. After getting past the low rain right outside Beaver Creek, I was trying to make good time getting to Whitehorse. It was as well I did; in the last 25 miles, my radio decided to be cranky about not getting a charge the night before, and the transmit power started dropping fast well before the low-battery light flashed (and I could still hear them trying to talk to me). Fortunately, a Cessna relayed my answers until I got within 10 miles and around the last mountain. People are awesome, given half a chance. 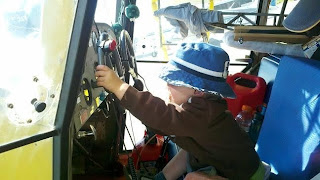 Missed the fact that there's a pilot shelter on the Whitehorse airport, with a gazebo. So, I slept down in town at the Robert Service campgrounds, which are pretty well run. The next day, met up with a friend right before takeoff. His son went from scared of the airplane to upset when he was removed from the cockpit so I could go - always happy to delay to create another fan of aviation! 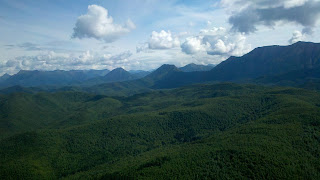 Out of Whitehorse, I put fuel in at Teslin, then went on to Watson Lake - great people there, and great pilots passing through and camping. I really should have gotten photos. Ah, well. Had a wonderful time with great people, and a blessedly dry and mosquito-free couch. Taking off was interesting - a rain front decided to start coming about the time I was doing a run-up. Busy with controls - no pictures until well clear. 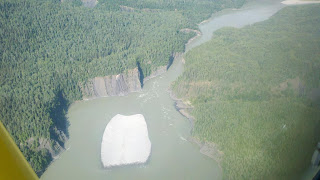 Hell's Gate on the Rapids of the Drowned, lower part of the Grand Canyon of the Liard River. 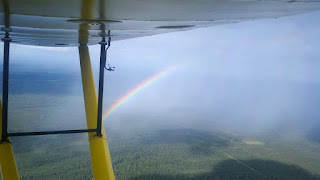 Dodging storms and showers, found a rainbow on the way into Fort Nelson.
Posted by On a Wing and a Whim at 8:16 PM