A Perfect Day is Out! 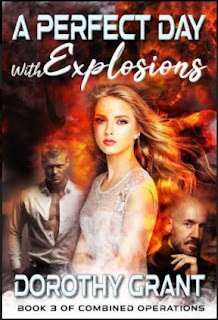 I know the trend out there is for "kick-ass heroines" who look like waifs and fight like 250-pound male MMA champions. You may have noticed I don't believe in that, any more than I believe in a cashless economy or successful central planning. But this one isn't about women kicking ass. (There is plenty of door-kicking in there. By gents trained to do it.) This is about the quiet strength to hold on when your world blows up around you, and roll with everything thrown at you without losing who you are, and what you value. Sometimes, courage is holding on one minute longer. Sometimes, it's choosing to trust, even when the person you thought you knew is stranger than you could imagine.

It's also about the not-trendy truth that the truly hard men who keep us safe don't usually look like cover models or movie stars, and you're not going to know where your vet has been and what he's done within the first few dates. Or even necessarily the first few years of marriage. Or ever. But just because he's having a hard time transitioning, don't mistake that for general incompetence: he's amazingly competent at things you may never know about unless the world has gone to hell.

And last, but not least, it's about what we do with a second chances.

There are also explosions, and a mocktail recipe I gleefully yoinked from a vet and his active-duty wife who have all the best random pieces of advice (I had to write it down somewhere I could look it up later. Why not in the book?) And a demonstration of why, sometimes, a sap is a better weapon than a gun in close quarters combat. And a toddler on a gleeful rampage.

I hope you like it. (Print book should be live later today; it's still in the queue.)