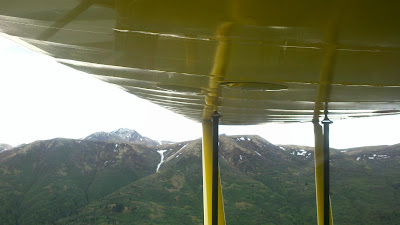 Today I flew out to Palmer, not far away, for the pancake breakfast. It was an interesting flight, as the shiny RV taildragger in front of me requested a deviation across Elmendorf AFB's airspace. Tower asked if I was headed to Birchwood or to the Palmer pancake breakfast as well, and offered to coordinate a deviation for me, as well. Well, heck, take the hypotenuse of a triangle instead of two longer legs in the crowded corridor between highway and mountains? Sure!

Thankfully, tower told the RV Elmendorf's frequency about the time I was going to turn crosswind, so I had spare brain attention to get ready and dial it in myself. On the other hand, it was a good thing Elmendorf was quiet. While the RV went like greased lightning and was almost out of the airspace before I was in it, I'm not so fast.

The rain yesterday was very soft and gentle, like melted snowflakes drifting down. On the mountains that aren't on the western flank of the Chugach, you can see why; a fresh layer of new-fallen snow. I need to get some gloves before I fly out; my hands were getting a little stiff from the cold. Fortunately, it was nice and only lightly cool, mid-fifties, on the airport surface.

The food was good, but while I was there, the wind off the glacier went from strong, with a few turbulent bumps, to much stronger. Leaving, it was blowing 16 gusting 22 knots, so I opted for the short runway, 9, into the wind. (See the dust trail it kicked up from the meltwater river bed.) 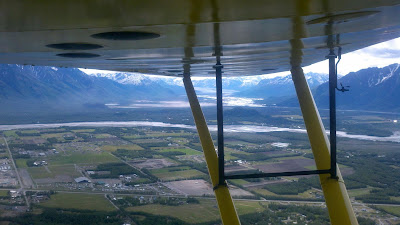 Departing traffic was like a hive the bear is still digging in for honey - I was in a swarm of taildragging Cessnas, a Harvard Mark IV, STOL nosewheel Cessnas, supercub-like experimentals, and various other planes. Not all of them were announcing, and some didn't remember to listen first, then tell the FSS on field that they had traffic and the numbers (the automated weather), so the poor Flight Service Station guy was trying to cram the information in while traffic was in very active motion. I feel bad for not telling him when I was clear of the airspace, but frankly, I couldn't get a word in edgewise. So I flew the plane, kept my ears and eyes sharp, and didn't have much time to spare for pictures.

Passing Chugiak, you can see summer coming up the mountain with verve and vigor. 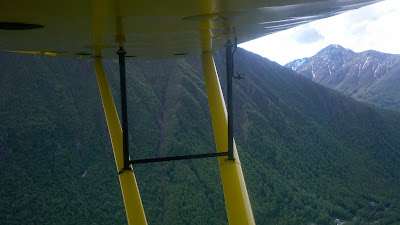 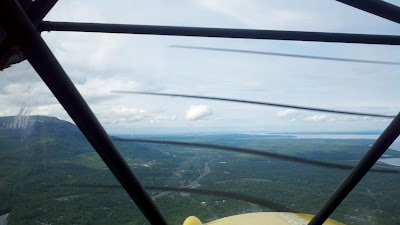