The rain drifted down in a light mist, barely enough to notice on the windscreen, while north of Palmer it was an opaque veil obscuring the mountains and the ground below. It made the day seem dimmer, grainy, washed-out like a bad photograph taken too quickly. 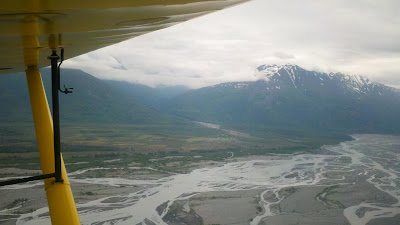 But the clouds had lifted while we'd had coffee at the Vagabond Blues in Palmer, so on the way out we turned left instead of right, and went up the meltwater river to the glaciers that spawned it. 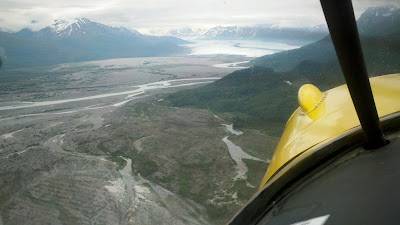 The picnic table strip is at the terminal moraine for the Knik Glacier - some enterprising soul ran a picnic table up on a jetboat some years ago. Last I heard, the main strip is so well-used that it's rutted and rough. People have actually started landing on "the alternate strip" often enough it's becoming the new picnic table strip. On the other hand, the main one is the easy one to spot from the air. 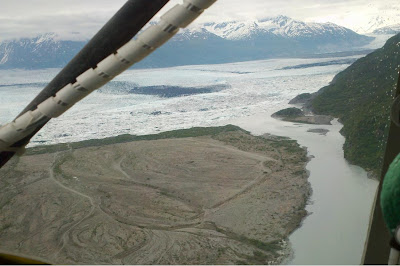 Carrying the mountains down to the sea in a reverse skunk stripe, the glacier touches my bones with a bit of cold no engine heat in the cabin can erase. Wind leaking in every crack and space brings the scent of ice, ground rock, age, and implacable force. 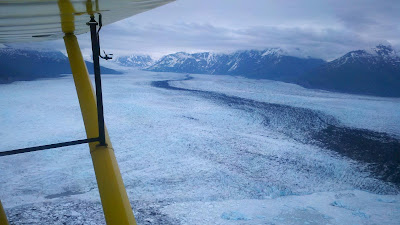 Going down the valley on the way home, the ground dropping away beneath my feet, with thousands of spots to land beneath, I always feel a little internal sigh of relief. 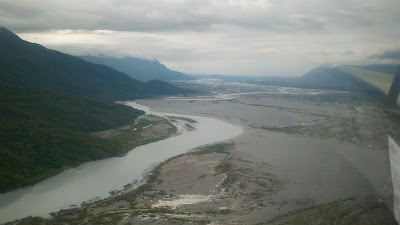 No landing at the Upper Lake George strip today - the old dry lake bed was not nearly so dry right now, and I'm new enough to my airplane and low-time enough I know when I'm out of my depths. It was enough, anyway, to satisfy my passenger's sightseeing desires.
Posted by On a Wing and a Whim at 1:09 AM