Having discovered after some good sleep and coffee that I got the pictures in the last post out of order, I've corrected them and will continue on.

Leaving Whitehorse in beautiful weather, I followed the Alcan down past Marsh Lake. 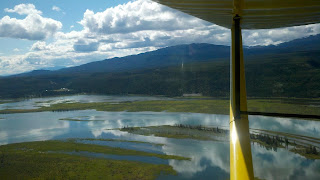 Refuelled at Teslin, where I met a wonderful young bloodhound puppy who will grow into a full howl - he's sure working on it! Canada has Community Area Radio Stations instead of Flight Service Stations like home in Alaska - the folks there can only tell you about the local weather, and update or close your flight plan if you file to that airport. They're pretty awesome folks, friendly, extremely well-versed in their local weather. After transferring fuel from the jerry cans to the gas tanks and chatting with a mechanic who came out to check out my plane, I went on to Watson Lake.

After Watson Lake, I flew on to Fort Nelson (the river rapids and rainbow are in the last post.) I dodged enough showers getting there that I went left over the Liard River instead of right over the Alcan right after Liard Hot Springs. That would be the last good weather I'd see for days. 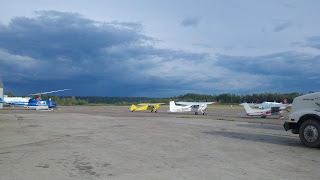 This is what the sky looked like south of Ft Nelson when I got there, and the next day it only looked worse. The FBO was awesome, though, and I found enough to do that I wasn't bored. 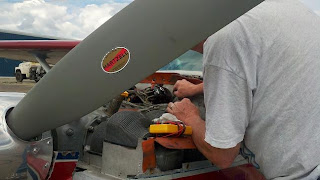 Like helping diagnose, try to repair, and replace a magneto. 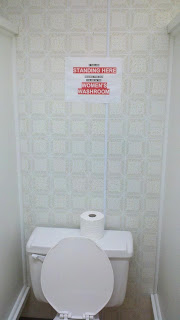 Finally made it, going low over the railroad tracks instead of taking the high road down the Alcan, to Fort Saint John, and spent another day weathered out there. How can you tell when the FBO is used to dealing with tired oilpatch roughnecks?

Got out of Fort St John to Grande Prairie by running low, close to the ground, dodging the worst of the lowest ceilings and keeping a sharp eye on my sectional for terrain. At Grande Prairie, weathered out for the rest of the day, and split a hotel room with a wonderful couple in a Maule who'd started from Watson Lake that morning. Yes, they covered in one day what took me five days - not only is their plane faster, but I have been pushing against a low weather trough, and they were not... until they caught up with it and with me. 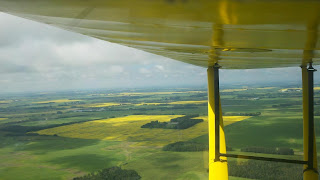 The next day the heavy rain stopped, and several hundred square miles were covered by fog. It lifted slowly, and a little after noon, we determined it was high enough to go. So we flew out as a two-ship flight, pushing forward. 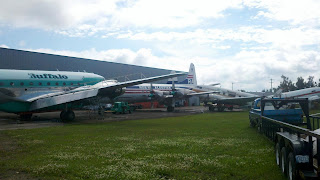 We got to Red Deer, and split another hotel for the night - this time exhaustion, not weather was the primary reason. It's an awesome place - the AirSpray hangar has a bunch of DC-3's outside. See the one in Reeve Aleutian colors? There's something I haven't seen in a long time! The folks at Hillman Aviation were putting a Christen Eagle biplane back together after the import inspection, and it was just head-turningly beautiful. We got gas at the tanks right outside, and they were kind enough to give us a lift into town and back. 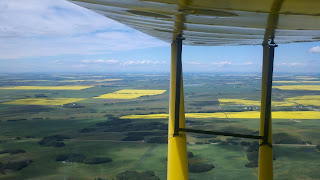 The next morning, life was beautiful. I departed right behind the Maule, but there was no way I'd keep up. They called back from near Lethbridge, diverting toward Medicine Hat because the wind was high and gusting - but by the time I got to Lethbridge, the wind had dropped to 15 gusting 18 knots, and the wind at the diversion was the same.

Fuelled and filed for customs at Lethbridge, waited an hour for the wind to die just a little, and then continued down to a border strip. 4000 feet of grass, and thank goodness it was mostly into the very gusty wind, because there were barbed wire fences on each side of the runway. Had a little trouble - EAPIS will kick back the application unless you tell it you're going to a 4-letter identifier airport. Which the border strips definitely are not - that's for big airports that have plenty of asphalt and registrations with ICAO. The help file on EAPIS says if you're going to a smaller 3-letter identifier strip, to put the nearest 4-letter identifier strip in the destination, and then put your actual customs airport in the remarks below.

So I did, and called ahead as I'm supposed to do (and why on God's green earth do I need to file online to enter the country, when I'm already going to be going to a customs port, and I still have to call the customs port to let them know I'm coming?)

When I got there, they had decided that since I'd filed for the 4-letter airport nearby (DESPITE PUTTING THE SMALLER AIRPORT IN THE REMARKS AS INSTRUCTED), I must not be coming... and didn't come out to look at my plane until I called them on the cell while sitting a hundred feet from the building.

Despite all the bureaucratic bullshit and stupidity surrounding the whole process, the customs agents themselves were polite, professional, and remarkably easy to deal with. 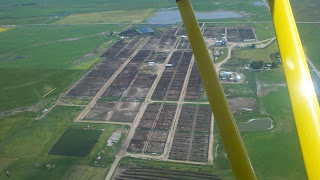 As for bull shit of a more elemental kind - I have now learned to always be upwind of a cattle or pig lot like this one when flying by at a mere thousand feet off the ground. Spent too long in cities - you'd think that's obvious. 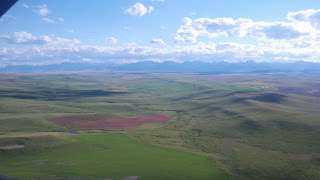 Spent the night camped by the plane at Choteau, Montana, as thunderstorms were blocking the passes south, and I'd rather camp under clear skies and wait out the billowing clouds to the south. 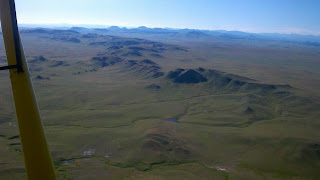 The next morning was bright, beautiful, blue skies everywhere, wind dropped to a playful five or seven knots just light enough to keep the mosquitoes and flies off. The major oddity as I packed up the tent - no dew on the grass or ground. 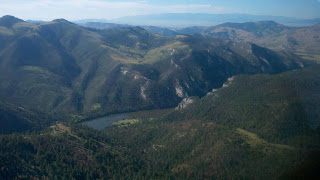 The road down goes past Helena to Bozeman, and the river and chain of lakes follows it before splitting off to one side. I took both down until they split - and seeing the narrowness of the road passes versus the width of the river channel, I took the river. 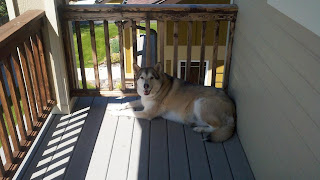 Finally arrived Bozeman, picked up by an old friend, and given coffee. Miss Cinnamon is no longer a small bundle of fluff with long legs sticking out, but she's definitely shedding as much as she always has! Just about everything I own has been liberally coated in dog hair as she has expressed how happy she is to see me, get a walk from me, and can she lick my plate when I'm done?
Posted by On a Wing and a Whim at 11:06 AM